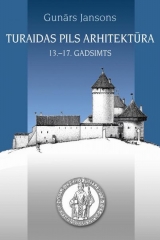 A book Dedicated to Sigulda 800th Anniversary Anticipating Sigulda 800th Anniversary several books will be published on Sigulda history and cultural heritage. One of them is „Architecture of Turaida Castle, 13th-17th Century” by Gunārs Jansons , architect and honorary doctor of Latvia Science Academy as well as associate of Latvia History Institute. Almost 50 years architect Gunārs Jansons has dedicated to development of restoration projects and ones of investigation of archaeological monuments. He is also the author of several books on cultural heritage, including, „Archaeological Monuments in the Gauja National Park”. Starting from 1958 Gunārs Jansons together with architect Gunārs Zirnis was working at investigation and survey of Turaida Castle, but in 1968 he became the author of Project for architectonic investigation and conservation-restoration of Turaida Castle complex. The book is a story about one of the three Medieval Castles in Sigulda – history of Turaida Castle, its building and extention in the course of following centuries, its investigation and restoration in the 20th century. This book gives you opportunity to feel the atmosphere of Turaida Castle like it was in the 16th century when it reached full flourish. The author wishes to offer this opportunity to the reader, on the basis of evidence given by eyewitnesses, to perceive, what castle was like when entering the castle gate. To kindle imagination there are viewable some attempts of graphical recontruction of the castle buildings, on the basis of written sources, ancient pictures, archaeological excavations and analogical solutions in other castles, which nowadays are completely lost. The results of the author’s long-lasting work are those Castle buildings, including three towers, which are restored at full hight and roofed and to a great extent renewing also the silhouette of the Castle, which through the centuries has been dominating in the landscape of valley. A view from the monumental Sigulda Order’s Castle, built from massive grey stone, accross the ancient valley towards unusually picturesque sunlit Turaida Archbishops Castle with restored vertical red brick masonry tower concentration is nowadays again integral part of Sigulda landscape. On the 5th April at 2 p.m. Turaida Museum Reserve and publishers of Latvia History Institute invite all interested persons to the book presentation „Architecture of Turaida Castle, 13th-17th century” by Gunārs Jansons. The event will take place in Museum Administration building. Information prepared by Anna Jurkāne Director, Turaida Museum Reserve.