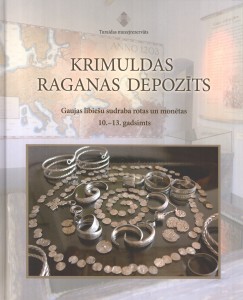 Among the objects of the Turaida Museum`s storeroom there is also Krimulda`s Ragana Hoard which encompasses unique testimonies about trade connections and cultural contacts of the Gauja Livs with European peoples from the 11th-13th century. It contains 176 artefacts which were found in a linen bag in the former area of Englarte manor, Ragana, Krimulda rural district in summer 2007. In order to provide information about this rare find, which is now viewable at exhibition „The Gauja Livs in the Cultural History of Latvia,” the Turaida Museum Reserve in collaboration with a publishing house „Zinātne” has issued the Catalogue about the hoard of silver ornaments and coins. It encompasses the textual part with explanation of the epoch and history of the hoard, genearal characterization of silver coins and ornaments as well as rich illustrative material and annotations. The scientific processing of the hoard`s objects was performed by the best scholarly researchers of Latvia – a numismatist Dr.Tatjana Berga and an archaeologist Dr.Guntis Zemītis. The most ancient coins, which  date back to the 10th century are Arabic dirhams, used as pendants. Besides, more than 130 coins of the 11th century minted in Western Europe, among which there are 123 German and 12 Anglo-Saxon coins as well as 3 Scandinavian imitation coins and 1 Danish coin. Very important is a coin of King Henry IV (1056-1106) from unknown mint in Lower Lorraine, which is found for the first time in Latvia and Eastern Europe. German coins are mainly minted in the area of Cologne, Lower Saxony, Franconia, Utrecht and other regions. The Catalogue is destined for academic purposes, new extended research, archives, museum studies and as a basis for new exhibitions and supplementary aid in educational programme of history in higher educational establishments and comprehensive schools. The catalogue contains information in two languages – Latvian and English and it will be available in Visitors Centre of the Turaida Museum Reserve.