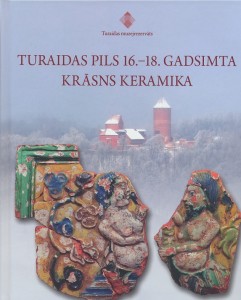 Summary
The Turaida Museum Reserve holds more than 7 500 fragments of stove tiles, the majority of which was found in the Turaida castle ruins, in 1974, as well as in the period from 1976-1999 during extensive archaeological investigations under guidance of professor Jānis Graudonis (1913-2005). Around 100 finds have been collected in 1953, 1968 and 2002 during several small-scale excavations or archaeological monitoring performed in the castle yard. It is one of the largest collections of post-medieval stove ceramics in Latvia. The finds provide evidence about heating devices used in the castle in the course of three centuries. In Turaida – one of the castles of Riga Archbishopric, built in the 13th century, the most ancient stove ceramic finds are tiles of the Late Gothic style, which date back to the first three decades of the 16th century. In the course of its existence, until 1560-ies, in the Archbishopric of Riga there have been built also stoves in the style of Renaissance. During Livonian War (1558-1583), the Turaida castle came under rule ofPoland and the centre of starostwo was established there. The rooms were heated with stoves decorated in the Mannerist style. Then, in 1620-ies, Turaida and the whole Vidzeme came under rule ofSweden and the castle became an economic centre. In that period the stoves were built in the style of Mannerism and Early Baroque. During the Great Northern War (1700-1721),  the north-eastern part of Latvia, where was located Turaida, was annexed to Russia and the castle became a landlord`s residence until it was deserted after the fire in 1776. The castle was heated with stoves in the Baroque style.

When investigation of this collection was started, there was compiled the catalogue of decorative motives of the stove ceramics, which is included in this publication. There are few written evidences on the tile stoves, which have existed in the castle.

Meager information about the Turaida castle stoves is mentioned in two inventory records. In 1590, the Polish auditors have mentioned also fireplaces or stoves in several castle rooms. Unfortunately, it is not possible to determine their precise localization because, except few towers, the other overground castle rooms have not preserved. The information provided by records is very brief – there is shortly mentioned a stove or a small stove, naming them as “simple” or “green” (in Polish  original – piec prosty, piecek prosty, piec zielony). Thus, the conclusion maybe drawn that at least one stove has been noticeably smaller in size because it is named – a small stove. It is possible, that ten the above mentioned “simple stoves” have been built from cheap unglazed and undecorated dish-shaped vessel-tiles with quadrangular opening. Whereas, two “green stoves” in the hall of the second floor have been built certainly from the green glazed tiles with a bas-relief decoration. Unfortunately, there is nothing said whether the stoves have been built recently or have been in use already several decades.

In 1624, the Turaida castle was inspected by Swedish auditor. According to description, it seems that already then a part of the old rooms was not inhabited. These records mention several bath-houses with stoves; however, their building materials are not named. Besides, there are described new buildings with tile stoves, one of them is mentioned as green. According to these sources and various colors of the tiles, found in archaeological excavations, it can be concluded that stoves have been occasionally rebuilt or built anew. As inspection of 1590 did not mention polychrome stoves, supposedly, they have been demolished then. Whereas, in 1624, there were not mentioned black stoves, therefore it may be assumed that they were built later. There is no more written information preserved about the Turaida castle stoves, however, wider information is provided by stove tiles found in archaeological excavations.

Stove tiles of the Turaida Museum Reserve have different stage of preservation – some specimen are unbroaken or with some small defect, numerous were found as a half or one fourth of the tile, but the thinnest of clay products unfortunately were fallen to small pieces. For that reason it is not possible to define precisely the number of unbroken tiles according to the total number of the tile fragments found in excavations. According to the form, the finds can be divided into three large groups – dish-shaped vessel-tiles, niche-tiles and panel-tiles.

Dish-shaped vessel-tiles of Turaida represent the most widely spread in Latviatype of vessel-shaped tiles with a round and flat base, cone-shaped body and quadrangular opening. Their height is about 11-12 cm, but the rim length of the opening reaches up to 14 cm. Most of them are unglazed, but some of them have a moulded rosette inside and they are covered with green glaze. As stated in the inspection records of the Courland`s estates, stoves from dish-shaped vessel-tiles have been built not only in the 16th century, but also in the 17th and 18th centuries they have been in the servant and auxiliary rooms of the castle, where the main function of the stoves was to warm the room. While tiles, with a moulded interior and coloured glazes, were used in the luxurious rooms of the castle.

Niche-tiles form a small group in Turaida. Their shape resembles a segment of longitudinally truncated cylinder, however, the moulded interior of the Late Gothic style, testifies about imprint of matrix. The height of niche-tiles reaches about 30 cm, width – 16-18 cm, they are covered with a green monochrome or polychrome glaze. In other places ofLatvia, outside Turaida, niche-tiles are found very rarely.

The third group is represented by panel-tiles, which consist of a moulded front panel and short or elongated thrown body attached to its rear. Panel-tiles in Turaida make up the majority of finds and were used from the 16th – 18th century. They may be divided according to the placement of tiles in the stove. From the pannel-tilesof the first half of the 16th century the biggest reach even a height of 35 cm and a width of 28 cm, whereas the rim of the most part of square tiles reaches about 20 cm. In the following centuries the length of the pannel-tiles rims a little diminished and in the 17th century it was mostly about 17-19 cm. Changes affected also edges of the moulded front panel – in the 16th century they were often richly profiled, in the 17th century the moulded front panel became flatter and the surface was mostly encompassed by a little elevated narrow rim, but in the end of the 17th century and in the 18th century there were also tiles with a very low relief and completely without rims. Whereas, corner-tiles of the stove, in the 16th century, had either rectangular smooth joint of both sides or twisted relief ornament, but in the last decades of the 16th century and in the 17th century the tiles were with a truncated corner or niche. In a couple of centuries, the shape of cornice-tiles had relevantly changed. In the second third of the 16th century the cornices of stoves in the Renaissance style were rather inexpressive – a slightly curved band attached to the bottom or the top of the straight band formed hardly noticeable projection on the surface of the stove. In future the curve became wider and bigger, until in the end of the 17th century only one satiated band with an expressive curved profile formed the cornice of the stove. The upper edge of the stove was finished with the crown-tiles – openwork free-standing elements, the main function of which was decorative and the supporting flange was created only at the lower edge. The Baroque style stoves sometimes were decorated with separator-tiles. Their surface formed a narrow profiled band.

Stove tiles of the 16th and 17th century in Turaida were mostly glazed with green lead glaze of different colouring. A small part of the niche- and panel-tiles of the 16th century have polychrome glaze. As a rare exception can be mentioned separate fragments with yellow glaze. In the course of the 17th century gradually increased the use of satiated dark brown and black glaze, but some tiles of the 18th century were glazed white. It seems that usually the stove was built of one-colour tiles. Only in the 18th century, it is known from the auditing of other castles or from the preserved stoves that both white and black glazed tiles were used together, for example, black stove cornices from both sides were encompassed by white separator-tiles, but the upper edge was finished with white crown-tiles.

The majority of stove tiles are moulded in low relief – geometrical figures or ornaments, architectural motives, human faces, half figures, full figures or genre scenes. The tiles of the Late Gothic depict figures of the saints and stories of the Bible. The Renaissance tiles depict portraits of secular governors and allegoric images, the tiles of Mannerism are enriched with elements of herbs, flowers and bouquets, whereas the Baroque style tiles often resembles a panel used for carpentry products.

Some of the Turaida stove tiles have similar decorations as those in other castles ofLatviaand abroad. Although, the tiles were made from local red clay, their decorative moulds were either imported or manufactured according to imported samples. Almost ten of the Turaida tiles with moulded front panel have sample engravings made by German and Dutch engravers. Those are artists from the circle of Albrecht Dürer, in the first half of the 16th century, in the Southern Germany, the so-called „small masters’’ from Nuremberg: Georg Pencz, ca. 1500-1550, Hans Sebald Beham, 1500-1550, court painters to the duke of Saxony: Lucas Cranach, Senior, 1472-1553 and his son Lucas Cranach, Junior, 1515-1586, German engraver Hans Brosamer, ca. 1495 – ca.1554, and Crispijn de Passe, Senior, 1564-1637, born in the Netherlands.

The Catalogue is arranged chronologically according to the approximate dating of the decorative motives on the tiles. The following information is provided about each specimen:

1. The inventory number of the Turaida Museum Reserve.
2. Name of the tile according to its positioning in the stove. If the fragment does not provide the necessary information, a question mark is used.
3. Colour of the glaze.
4. Whole tile dimensions in cm (a – height, p – width, b – thickness with a thrown body). The dimensions of reconstructed tiles are given approximately.
5. A short description of the decoration or plot. Approximate dating.

In January 2013, chemical composition analysis of five stove tile fragments, found in archaeological excavations at Turaida castle, was performed in the Institute of General Chemical Engineering of Riga Technical University.

Scanning electron microscopy (SEM) and energy dispersive X-ray spectroscopy (SEM‑EDX methods) are well suited for research of archaeological  type ceramics. It was confirmed by observations obtained during morphological and chemical composition analysis of stove tiles in the Turaida castle. It was determined that the green glaze is coloured by copper compounds, the brown glaze – by copper and iron compounds, whereas the yellow glaze – by tin and antimony compounds. According to chemical composition analysis of several ceramic sherds, it was concluded that their composition is homogeneous and probably the clay for stove tiles was used from nearby site. However, for a thorough determination of clay origin, petrographic analyses and mineral identification should be performed.