Home → Campaign „Learn about history and events of the Turaida castle in the course of 800 years through the stories told by castle objects!” 3d story: Stylus – ancient writting tool
LV
EN
en

Campaign „Learn about history and events of the Turaida castle in the course of 800 years through the stories told by castle objects!” 3d story: Stylus – ancient writting tool 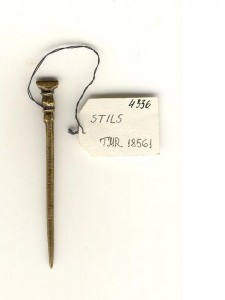 Several medieval writing tools – stylus (Greek – stilos, Latin – stilus), made of bone and bronze have been found in the Turaida Stone Castle. Their length – 66 mm to 118 mm.

In the Middle Ages the Turaida Stone Castle was used not only as military fortification but also administrative centre. According to archaeological finds related to the writing culture and evidences of archives, it was also cultural centre of that time. Archbishops of Riga and their counsellors – the Dom Chapter periodically resided in the Turaida castle.  Reading and writing skills in the Middle Ages were mostly spread among clergymen.

In Medieval Europe  the stylus were adopted form  ancient Rome. These pointed, pen-shaped instruments were used for writing on wax tablets suitable for multiple-use. The pointed end of stylus was used to scratch characters in the soft wax, whereas the other end of the instrument – the so-called „spade” was used to correct mistakes and erase the written text.

Wax tablets and stylus were widely spread in Medieval Europe. In comparison with expensive parchment, the tablets were relatively cheap and easy to make. On their surface were recorded various casual notes which did not have permanent value, for example, daily notes, rough copies of documents, accounting or private letters.

The tablets  could be used one at a time or several in succession. In this case, they were connected at the back by strings or leather straps, threaded through the small holes  on the edges of small boards. Two tablets connected in such manner were called codices. They were often depicted in medieval drawings.

Wax tablets were made from wood and wax. They were hold until certain time, then – thrown away or destroyed. In the 14th century paper appeared in Europe. It was much cheaper than parchment and gradually wax tablets and stylus were displaced. It is considered that in the 15th century their use in social life disappeared, however, in some places the stylus and wax tablets as relics preserved until the 19th century.

Medieval wax tablets rarely preserve till nowadays. Usually they are not found in archaeological excavations, however, three wax tablets have  preserved in Riga Dom Museum (now – The Museum of the History of Riga and Navigation). In the territory of Latvia bronze, iron and bone stylus have been found in the stone castles and cities of Latvia – Riga, Koknese, Turaida, Aizkraukle, Lokstene, Cēsis and Bauska.