Home → Campaign „Learn about history and events of the Turaida castle in the course of 800 years through the stories told by castle objects!” 4th story: Arrowheads
LV
EN
en

Campaign „Learn about history and events of the Turaida castle in the course of 800 years through the stories told by castle objects!” 4th story: Arrowheads

During archaeological excavations, performed in the Turaida stone castle, archaeologists found 355 iron arrowheads. Their size and manufacture are amazingly diverse, because they have been used in both shooting with bows and crossbows. According to the method of fastening, the arrowheads, found in excavations, can be divided into two big groups – tanged arrowheads  and socketed arrowheads. Arrows have a wide range of sizes – length from 42 mm up to 115 mm.

Shooting with bow and arrows has been familiar already to mankind from prehistoric times. A part of the researchers equates the significance of this device in history of human development to the discovery of fire and invention of bicycle. The use of bow in hunting was an opportunity for ancient man to get a game more handily, to get food and raw materials – furs and bones. The bow became an important weapon also in the battlefield. Along with the introduction of firearms in the settlement of military conflicts, around the 15th/16th cenurty,  the use of bows in the battle diminished.
In the medieval battles also crossbows were used. Their arrows flew farther than ones of the bows and their impact force was bigger. The only drawback was that in one minute it was possible to shoot 1-2 arrows. Whereas, a skilled bowman from a bow could shoot up to 12 arrows, so in the battle-field the attacks were organized shooting  alternately with bows and crossbows.

The Turaida Castle and  its surroundings were quite often a battlefield between the 13th and the 16th century, and the castle was often used for political negotiations or gatherings of conspirators.  The Turaida region was attacked by Estonian, Lithuanian and Russian forces, and particularly by the knights of the German Order in Livonia.  Over the course of several centuries, the archbishopric of Rīga and the Livonian branch of the German Order struggled over the issue of which entity would have greater power.  The German Order tried to weaken and military subordinate its spiritual ruler, the archbishop of Rīga.  The Turaida Castle was besieged and conquered several times over.  Sometimes the Order took over the castle without military attacks.  Threats were enough.  The Brethren of the Order arrested several archbishops of Rīga – Albert Zuerbehr (1253-1273), Johann III of Schwerin (1294-1300), Sylvester Stodevesher (1448-1479), and Wilhelm of Brandenburg (1539-1563).  The endless quarrels among the rulers of Livonia did not lead to long-lasting successes for either side. 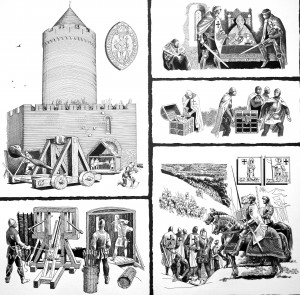 Siege of Turaida Castle, 1297. Drawing by A. Stankevičs

Particularly harsh battles were waged over the rights of the Rīga archbishop and the master of the Livonian branch of the German Order in the city of Rīga.  Between 1297 and 1330, the city and the German Order engaged in war.  The archbishop of Rīga was an ally of the city’s residents, so the forces of the master of the Livonian lands besieged the Turaida Castle in March 1298.  Inside was Archbishop Johann III of Schwerin (1294-1300).  After eight days of battles with catapults and other equipment, the archbishop surrendered by opening the castle’s gates.  The Order burned down all of the buildings around the castle.  They also emptied the archbishop’s treasure chests, stealing his pallium, various pieces of silver and other church properties at a value of 6,000 silver marks in all.  The archbishop transferred all of his properties to the Order after the battle, including the Turaida Castle, but the brethren still kept him in prison in Sigulda and Viljandi (Estonia) for 33 days.  For part of that period, the archbishop only received bread and water.