Home → Campaign „Learn about history and events of the Turaida castle in the course of 800 years through the stories told by castle objects!” 5th story: Postcards
LV
EN
en

Campaign „Learn about history and events of the Turaida castle in the course of 800 years through the stories told by castle objects!” 5th story: Postcards 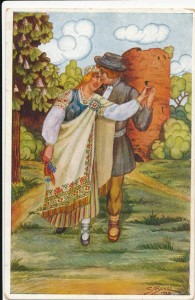 The postcard depicts a couple, dressed in national costumes in the Turaida castle yard with  ruins of the Main Tower  in the background.  Coloured  drawing, 1928. On its back side – an instcription „Turaida” and folk-song (a song about the beauty of nature and time for marriage.)

The author of the drawing is an engraver and artist Stefans Bercs (1893-1961). He has drawn various postcard plots dedicated to the anniversaries of the Republic of Latvia, summer solstice celebration, ancient valley of the River Gauja, different cities, castle ruins and national costumes. As an engraver he has made awards of the Republic of Latvia – the Viesturs Order, 1st and 2nd grade (esablished in 1938), memoral medal dedicated to the 10th anniversary of the Latvian War of Liberation  (1928), medal of the Latvian Agricultural Chamber – „For work and diligence” and others. 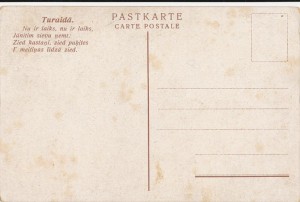 When, in 1889, the railway track between Riga and Valka with a stop at Sigulda was launched, the holyday-makers, mostly inhabitants of Riga,  increasingly visited these sightseeing spots. The tourists wanted some keepsake from the trip and this desire became fulfilled through the new invention of the 19th century – a photography. It is hard to imagine a better souvenir as a photography of the visited spot, boarding-house or hotel!

In the Russian Empire, the first postcards  with important building or natural objects, initially appeared in Riga in 1894.  The most ancient known postcards with Sigulda and its surroundings are from 1898. It should be added, that for these postcards were used also negativs which are few years older. The visitors purchased such view postcards and sent them to relatives, friends or acquaintances.

Making and selling of postcards provided a greater  opportunity  for postcard publishers, who started to produce them in multiple copies, especially in the beginning of the 20th century, to make profit.