Home → Campaign „Learn about history and events of the Turaida castle in the course of 800 years through the stories told by castle objects!” 6th story: plates with paintings
LV
EN
en

Campaign „Learn about history and events of the Turaida castle in the course of 800 years through the stories told by castle objects!” 6th story: plates with paintings 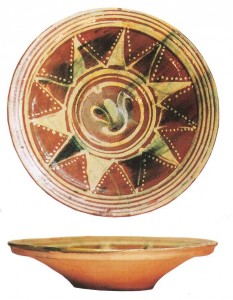 Ceramic plate with a swan in the middle of solar disk found in archaeological excavations at Turaida castle, 17th/18th century.

Ceramics found in archaeological excavations are specially important for historians because according to their processing technology it is possible to date and characterize the time of their manufacture. The ceramics obtained during archaeological investigation at Turaida castle were used since the 11th century when potter’s wheel was not so widely used and pots were handmade. Then followed flourishing of the 12th century economy and technologies, represented by ornamented or unornamented tureen-shaped vessel of a new form manufactured on the potter’s wheel. Only few whole ceramic vessels from the Middle Ages have been found in Turaida, usually they were obtained in a form of potsherds. These finds provide evidence that  potters started to apply glaze to their ceramics. The decoration is ascetic with stylized floral ornament where predominate brown and yellow colours. New features in the history of the Turaida castle pottery were brought in the 17th century from which more evidences have preserved. Those are bigger and smaller ceramic pots, jugs, bowls, plates and other ceramics. Especially outstanding are two glazed and beautifully decorated ceramic plates or dinner-plates which date back to the 17th/18th century. Jānis Graudonis, head of archaeological research in Turaida castle characterized them as real works of art. [1]

One of the plates with a multicoloured storyline painting in the centre was found at defensive wall of the southern forecastle in 1978. The painting represents the sun with human face and sunbeams, which rotate clockwise. The central painting is encompassed by three concentric coloured circles and depiction of circular movement. The author of the painting probably wanted to depict a wheel of the sun in motion, which symbolizes cosmic order.

In the 17th century Europe the theme of the sun was popular. The sun in France personified the king, it was symbol of his power. The king of France Louis XIV (1643-1715) became known as the „Sun King”. This name the monarch got after a court entertainment known as masque where he participated dressed in a mask of Apollo – the god of the sun. 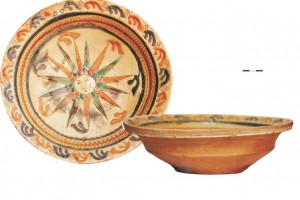 Ceramic plate with a painting of the sun in the centre found in archaeological excavations at Turaida castle, 17th/18th century.

The sun with human face on the Turaida plate is not the only known painting of this kind in Latvia. According to research carried out by architect Ilmārs Dirveiks, in the second half of the 18th century, in the centre of the clock of Pasiene church and monastery located in Latgale was depicted the disk of the sun with smiling human face.[2] The second plate found in archaeological excavations at Turaida castle has similar painting and colours, only in the middle of the solar disk instead of human face there is depicted swan. Probably,  both plates were made by the same potter. It is not known, whether he was a local master or the plates in Turaida castle have been brought from other place. Anyway, the both plates are the most beautiful ceramic vessels, the analogies of which can be found in the 17th century archaeological material in Sweden, Germany and other European countries.