Campaign „Learn about history and events of the Turaida castle in the course of 800 years through the stories told by castle objects!” 7th story: Candle Scissors Found in the Turaida Castle 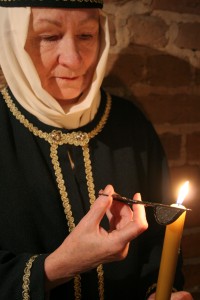 In the Middle Ages candles were a privilege of the nobles and wealthy people. They were put into lantern, attached to the ceiling, or into various types of portable candlestics. In the territory of  present-day Latvia candles first of all were  used in medieval castles, consequently in the 13th century. Also the rooms of the Turaida castle were filled with candlelight early in the morning and late in the evening. Iron and ceramic candlestics, found in archaeological excavations, as well as special candle scissors for candlewick trimming and extinguishing the flame give evidence about that. From the ordinary scissors they differ by metal box, attached to one of the blades. The box is a small, semicircular or quadrangular container envisaged for catching the trimmed wicks that they do not fall on the floor and cause a fire.

Candle scissors with decorative handles and oval box. Found on the western slope of the Turaida hill fort

Watching of candles and their extinguishing before going to bed was one of the daily duties of the castle guard or other servants, because unsupervised burning candle was dangerous. According to the inner order regulations, issued in the 15th century in the Bishop’s residence in Prussia, it is known that a duty of kitchen supervisor was „to arrange lighting in the castle – to light a chandelier at 4:00 in the morning  and in the same way to take care about lighting at the table in the evening at dinnertime.”

Several candle scissors and their fragments  have been found in the Turaida castle. On the basis of research carried out by Jānis Graudonis, head of archaeological excavations, it is known that the scissors were used in the rooms of Archbishop and his servants in the 13th-15th century. Two of the scissors, found in the Turaida castle, can be viewed in the exhibition „Turaida as Part of the Riga Archbishopric, 13th to the 16th century.” The candle scissors with semicircular box have decorative, figuratively curved handles. Other scissors are more ordinary, massive with longer handles. They have a quadrangular box for trimmed wicks.

Scissors have been used not only in the Middle Ages, but also in the palaces and manors  of the 17th-19th century. In the course of time, changing their outward form, they have faithfully served the people until electric light appeared in homes.