Campaign „Learn about history and events of the Turaida castle in the course of 800 years through the stories told by castle objects!” 8th story:Stove Tiles of Turaida Castle 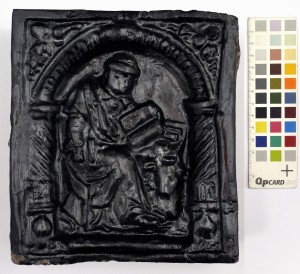 Stove tile with picture of Luke the Evangelist. After reconstruction

The main task of the tile stove was to provide pleasant warmth in living accommodations during wintertime.  In the noblemen rooms the stove with expressive decoration and coloured glaze was a significant object of interior, which not only decorated the room, but also provided  new knowledge and became the subject  for socializing. The Turaida Museum Reserve holds more than 7 500 fragments of stove tiles, the majority of which was found in the Turaida castle ruins, during archaeological excavations (1976-2000) under guidance of professor Jānis Graudonis (1913-2005). It is one of the largest collections of post-medieval stove ceramics in Latvia.

The ancient finds mostly consist of the sherds broken into many fragments. Their  research and gathering together are similar to the popular Ravensburger Puzzles, when a picture is composed from many fragments. Mutually adequate fragments of stove tiles should be found to restore the previous form and decoration, determine age and interpret the meaning of images. Since 2012, research of the Turaida stove tile ceramics has been performed by Dr. hist. Ieva Ose. Again various stove tiles, which resemble an ancient picture encyclopaedia, were brought into the daylight, investigated and scientifically processed. 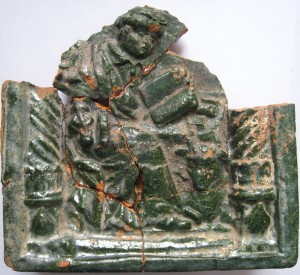 Stove tile with picture of Luke the Evangelist from Turaida castle

The Turaida tile stoves have been built almost three centuries,  from the beginning of the 16th century until the great fire in 1776, after that the castle was not inhabited. Consequently, the Turaida stove tiles are decorated by the plots, ornamental compositions and portraits characteristic of the Late Gothic, Renaissance, Mannerism and Baroque styles in Europe. The variety of motifs for tile decorations and high level of artistic depiction were provided by decorative moulds or negative forms, which were made by masters – talented sculptors using as a sample engravings and woodcarvings of famous artists. The Turaida stove tiles demonstrate that works of  Lucas Cranach, Hans Brosamer, Crispijn de Passe and other German and Netherlands  engravers have been imitated in clay reliefs.

The tiles provide an insight into appearance of governors and demonstrate their attitude towards the Reformation movement, illustrate Biblical stories and ancient historical events enabling to anticipate their influence on contemporaries, characterize daily games among simple people as well as investigate the surrounding nature and focus on depiction of flowers.