Campaign „Learn about history and events of the Turaida castle in the course of 800 years through the stories told by castle objects!” 10th story: Warm Air Stoves in the Turaida Castle 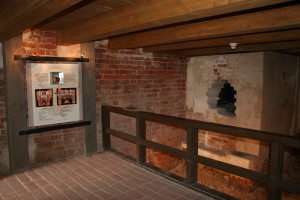 Warm Air Stoves in the Turaida Castle
Between the 13th and the 18th century, the castle was heated with fireplaces, warm air stoves, ceramic tile stoves, and other types of stoves.  Archaeologists have found more than 20 different locations for stoves, and fragments of five warm air stoves have been preserved.  Such stoves were also used in other Latvian and European castles during the Middle Ages.
How warm air stoves worked
The stone chamber of the warm air stove of the southern part of the room has been preserved along with the brick floor from the 15th and 16th century.  The stove was fired from the outside.  As the rocks grew hot, they heated the surrounding rooms.  The air flowed upward via channels in the floor of the second story of the building, thus heating the workroom of the archbishop.