Campaign „Learn about history and events of the Turaida castle in the course of 800 years through the stories told by castle objects!” 13th story: The wooden well 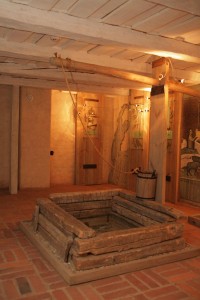 A fragment of the interior of the large well of the castle, 16th century

A partial reconstruction of a wood-lined well is now on display in the western block of Turaida Castle as part of the exhibition “The history of construction of the Turaida Castle”. A fragment of the internal wooden enclosure located in the lower part of the large courtyard well is being exhibited. The well was filled with earth already in the 18th century, after a man fell into it and drowned. It was first discovered and cleaned in 1992 during archaeological research. According to radiocarbon dating the well was built around the 16th century, possibly in place of an older well. Nowadays, the well has been restored and can be seen in the courtyard of Turaida Castle. Water is again accumulating in it.

The depth of the well reached 9 metres from courtyard level; size of the upper part was 1.5×1.5 metres. The wooden lining was made of squared aspen trees. A thick plank floor covered the bottom of the well, supported by inclined logs in order for water not to push the floor upwards.