Home → Campaign „Learn about history and events of the Turaida castle in the course of 800 years through the stories told by castle objects!” 14th story: Clay pipes found in Turaida
LV
EN
en

Campaign „Learn about history and events of the Turaida castle in the course of 800 years through the stories told by castle objects!” 14th story: Clay pipes found in Turaida 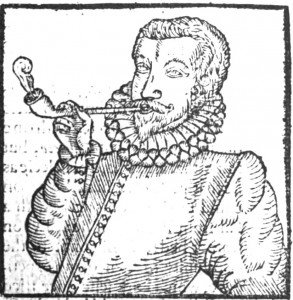 Sailors travelling from America brought dried tobacco leaves and tobacco seeds to Spain already in the 15th century. First, Europeans tried to grow tobacco as an ornamental plant and to use it in medicine, especially in wound and abscess treatment. A few decades later English sailors familiar with Peace pipes used by Indians brought the smoking device – a pipe with a widened end – to the Old World. Chopped tobacco leaves were inserted into the pipe, lit up, channelling smoke to the mouth. Soon men on the shores of the British Isles were smoking tobacco.

As all over Europe, white clay pipe fragments have also been found during archaeological excavations in Turaida castle. According to the form of the pipe bowls and notations on the pipes found in Turaida, these date back to the 17th and 18th century. On several Turaida pipe stem fragments inscriptions “GOUDA” and “IN GOUD” can be seen, which refer to an important smoking pipe production centre – the city of Gouda in southern Holland. Dutch smoking pipes were brought to Turaida either in the second half of the 17th century or in the course of the 18thcentury. Many of the Turaida smoking pipes have a plain surface; few of them present ornaments and must have been more expensive. Their stems are decorated with embossed heraldic lilies, acanthus leaves and expressive strands of curving plants. 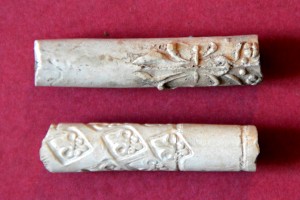 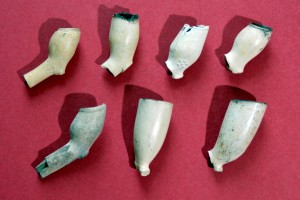