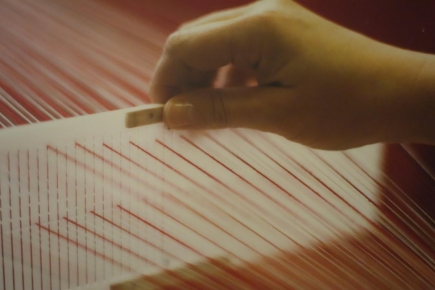 Exhibition „Sami handicraft and design” is open in the Turaida Museum  Reserve. Just  almost one week left  to the day when it will be closed. Today we are publishing some sentences from exhibitiom guide.

Duodji, Sami handicraft and design,
is an importanat part of the Sami culture
and a strong and unmistekable ethnic identity marker.

By duodji we mean the handicrafts and artistic handicraft
made by the Sami, based on Sami traditions.
Every duodji article has a historic background.
The influences and ideas between the Sami themselves
and from other people have naturally left their mark on duodji.
Duodji has been shaped by generations of master artisans
including the demands of nomadic life,
the natural material used,
cultural influences and personal creativity.

Previously the Sami themselves
produced the most necessary utensils
demanded for survival.
The old Sami functional artifacts,
which normally are considered handicrafts, have,
in the modern world,
lost their traditional function as utilitarian objects.

Today duodji is not only refined artistic handicraft
that is a joy to look at
and which testifies to the skilfulness of artisans’hands,
but it also radiates insightfulness and concern
for the Sami culture.

The native traditional handicraft is based on
antler, bone, wood, outer birch bark, pewter and leather.
Pewter thread production is a Sami technique.
The nomadic way of life only allowed working with metals
in a very limited way.
Most smith work was therefeore
done by the smiths in the villages.
A number of Sami nowadays
forge their own knife blades
and other special tools.
Today there are also a number of Sami silversmiths.”