Home → Campaign „Learn about history and events of the Turaida castle in the course of 800 years through the stories told by castle objects!” 16th story: Two hoes and the Large Semi-Circular Tower
LV
EN
en

Campaign „Learn about history and events of the Turaida castle in the course of 800 years through the stories told by castle objects!” 16th story: Two hoes and the Large Semi-Circular Tower 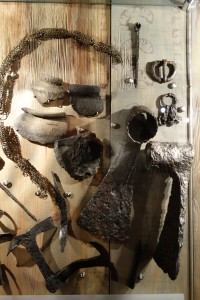 Among the antique objects found in the ruins of large semi-circular tower were two hoes from the 15th or 16th century.  They were under the floor near the foundation stone of the eastern wall of the cellar.  It is assumed that the hoes were used to dig out space for the foundations of the building.

Firearms became of strategic importance during the 15th century, and castles were rebuilt to deal with this situation.  During the 15th century, the large semi-circular (western tower) of the Turaida Castle was built along with the western defensive wall.  Its round part is outside the wall, and the rectangular part is inside it.  Because part of the tower was outside the defensive wall, use of firearms became more effective and the range of aiming was broader.  The advantage of round and semi-round towers was that they were more durable against battering rams and cannonballs.  The thickness of the walls depended on the direction of the anticipated attack – 2.10 m toward the yard, but 2.90 m on the sides and in the rounded part.