Home → Campaign „Learn about history and events of the Turaida castle in the course of 800 years through the stories told by castle objects!” 17th story: Dividers of the Turaida Castle and Practical Geometry in the Middle Ages
LV
EN
en

Campaign „Learn about history and events of the Turaida castle in the course of 800 years through the stories told by castle objects!” 17th story: Dividers of the Turaida Castle and Practical Geometry in the Middle Ages 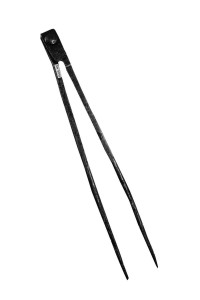 A big iron divider, 35 cm long, is one of the finds of archaeological excavations in the Turaida castle put on display in the exhibition of the Museum Reserve. According to conditions of the archaeological excavations it was dated to the 15th-16th century. The main component parts of divider are two sharpened bars or legs, the blunt and widened ends of which are joined with a rivet so that it would be easy to increase or reduce the distance between bars. Supposedly, the Turaida castle divider, which is almost one cubit long, once was a tool of master builder or architect of the castle.

Metal dividers have already been used by ancient Romans. Similar instruments have been used in both Middle Ages and Early Modern Period. Due to the handiness of the tools their form  has preserved protractedly almost unchangable.

Geometrical objects in the environment created by man can be met at every turn and influence human mind in both emotional and intellectual way. In the Middle Ages the geometry was related to the Creation of the World and the circles were considered as divine symbols. Particularly many geometrical figures constructed by divider were found in the most outstanding samples of architecture, especially, in the churches and noblemen’s palaces, which were richly decorated with deep perspective portals, clustered pillars, circular rows of columns, semicircular arcades of passages and expressive cornice profiles, etc. Divider was used in construction of rounded form components of architecture. In the Middle Ages the architect used a small divider drawing a draft plan of the building on paper or parchment whereas a big divider, the hight of which could reach one metre, he used on building site to mark out the plan of the building. It was not easy to use a big and heavy divider in the natural environment – it demanded not only theoretical knowledge but also practical skills. Observations had to be made so that one leg of the divider would not slip out of the centre, but the other one would leave visible enough imprints on the surface.