Campaign „Learn about history and events of the Turaida castle in the course of 800 years through the stories told by castle objects!” 18th story: Romanesque style window in the main Tower of Turaida castle 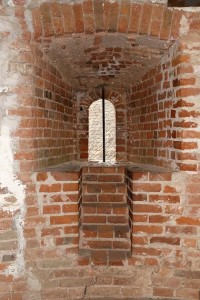 The window with Romanesque ceiling , chairs on both side in the main tower of Turaida Castle

Romanesque architectural style has appeared in Europe around the year 1000, but in the middle of 13th century it was replaced by Gothic. In Latvia we can see only the late Romanesque style, which was established by the appearance of masonry architecture in the beginning of 13th century. Romanesque most fully manifested in sacral buildings – churches. While in the large temporal buildings – medieval stone castles, architect should first think about the practical and defensive use of the building. Therefore, Romanesque decorative features in the architecture of castles we can find less.

In Turaida Stone Castle the only fully viewed building since 13th century that represents the Romanesque style, is the 30m high main tower – Bergfried. The Turaida Bergfried heavy wall represents the Romanesque style – wall thickness on the north side of the lower deck reaches 3,7m. As elsewhere in Turaida castle, also in the main tower there are not a lot of holes in the walls. On the 4th floor, where was a pleasant staying next to the fireplace, is a window with Romanesque ceiling , chairs on both side and a view to Kubeselle outside the window.