Home → Campaign „Learn about history and events of the Turaida castle in the course of 800 years through the stories told by castle objects!” 19th story: Medieval pottery in Turaida’s Castle exhibitions
LV
EN
en

Campaign „Learn about history and events of the Turaida castle in the course of 800 years through the stories told by castle objects!” 19th story: Medieval pottery in Turaida’s Castle exhibitions 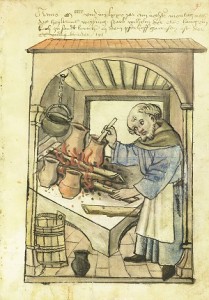 The cook from Nuremberg. 15th century

During the Middle Ages in the Turaida Castle stayed a significant number of nobles of that time, who had to be ensured with accommodation, dining and nutrition. The nutrition needed food and also tableware and cutlery –  pots, barrels, buckets, cups, bowls, plates, knives, forks, spoons. During Turaida’s Castle archaeological research there were found utensil fragments from wood, clay, glass, bronze and copper.

Medieval pottery of Turaida’s Castle exhibitions were found in Turaida’s Castle and also in Kubesele hillfourt that localises near Krimulda Rectory. They are made in 15th – 16th century, that are most likely used by Krimulda’s church ministers and inhabitants of the nearby village. 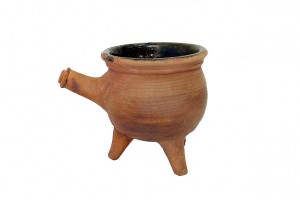 ‘’Three leg tripod’’ – cooking bowl with dark inside, concentric lines and handles – was found in Kubesele hillfourt. The utensils with legs in medieval Livonia has appeared around 15th – 16th century. They were used for making food on fire.  Clay tripods wasn’t placed directly into the fire or coals, but was placed on the edge of hearth or fireplace, because the bowl could break in high temperature. To prepare the food, the cooking bowl are often turned around, so the heat can encircle it evenly from all sides.