Campaign „Learn about history and events of the Turaida castle in the course of 800 years through the stories told by castle objects!” 20 story: Baroque Style Stoves in the Turaida Castle 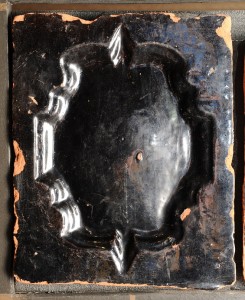 Baroque is a style in European art and architecture which spread around from 1600 to 1770. The period of Baroque style and its form of expression in various countries were different. The beginning of the Baroque art style in the territory of Latvia is considered around 1660, but its end around 1775.

Baroque style decor has also been used in decoration and form of interior furnishings.

In the Turaida castle those are stove tiles which once were magnificent interior objects. Unfortunately during the great fire, in 1776, inner rooms of the castle burnt out and tile stoves collapsed. Among archaeological finds of the Turaida castle there are many Baroque tiles of various forms which would be enough for renovation of two stoves at least.

Partial reconstruction of the Baroque style stove may be viewed on the top floor of the west block of Turaida castle.