Home → Campaign „Learn about history and events of the Turaida castle in the course of 800 years through the stories told by castle objects!” 21th story: Bells in Turaida
LV
EN
en

Campaign „Learn about history and events of the Turaida castle in the course of 800 years through the stories told by castle objects!” 21th story: Bells in Turaida

With sounds of the bells we are approaching the New Year’s Eve and closing the series of stories – a campaign „Learn about the history of Turaida castle and events in the course of 800 years through the stories of castle objects!” During this campaign we kindly asked the visitors to pay attention to antiquities which have been found in the castle or depict the castle. In the course of the year, once in 2 weeks there was highlighted some special object and with help of it disclosed an exciting story about 800 years old history of the Turaida castle. 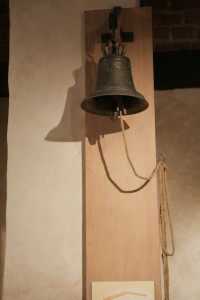 Church bell form Mālpils in the exhibition “The Turaida Castle and distric, 1566-1776”

The Christmas time is the darkest, but at the same time it is the most enlightened time of the year, full of hope. Traditionally, the winter solstice and the birth of Christ accompany by bell ringing. Christianity believes that the bell is a symbol of faith, and the ringing of the bell calls to church service.

In Latvia church bells was first mentioned in writings in connection with the Orthodox church in Jersika in the early 13th century, but little bells and bronze tinklers are found in archaeological material as part of clothing in everyday life from 10thcentury. In Turaida museum reserve’s exibition, dedicated to the lifestyle of the Gauja Livs between the 11th and 13th century, you can clink a tinkler – for happiness and success!
Turaida’s church bell that still calls for church service, has a significant age. It is made in 1663 in Riga by cannon and bell molder Johan Meyer.
In Turaida stone castle and it’s surrounding bells have been also in earlier times, but the oldest information about them can find in the audits of the castle in the end of the 16thcentury.
One church bell, that is made in the 16th century, is a part of exibition in the third floor of the western block of the Turaida stone castle. It is found in the beginning of the 21st century in Mālpils and was excavated out of the ground, where it has layed an unknown time and for unknown reasons. Probably, Mālpils (German lang. – Lemburg) parishioners buried it during the war to hide it from enemies.