Turaida in historical documents of the 13th-16th century 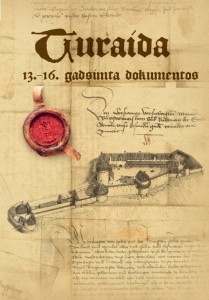 Scientific editor of the collection of records – Ilgvars Misāns, Faculty of History and Philosophy of the University of Latvia; scientific advisor and German language editor – Kārlis Zvirgzdiņš, the Latvian State Historical Archives; literary editor – Ieva Jansone; artist – Aija Andžāne. The texts from Latin and German languages were traslated by Aleksnadrs Jansons, Brigita Cīrule, Andris Levāns, Indra Ozoliņa, Kārlis Zvirgzdiņš and Vija Stikāne. Editor of the Latin language – Gita Bērziņa, translator of the summary into English – Eva Eihmane, editor of the English language – Antra Legzdiņa. The book consists of a foreword by Anna Jurkāne, Director of the Turaida Museum Reserve; introduction, four parts, list of references and historical sources, index of place-names, person names, list of pictures into Latvian and Englsih, summary in English. The book is illustrated by documents from the Latvian State Historical Archives, the Tallinn City Archives, the Main Archives of Ancient Documents in Warsaw, the Czartoryska Library in Kraków, the Swedish State Archives in Stockholm, the Schwerin Archives and M.Mažvydos National Library of Lithuania in Vilnius.

The book „Turaida in historical documents of the 13th-16th century” is a compilation of historical texts about Turaida castle from 1214 to 1599 as a residence of Archbishop of Riga and military fortification, a centre of bailiwick – circuit court and administration in the Middle Ages and Early Modern Period and Trans-Daugava Duchy.

Both material historical sources, obtained during archaeological investigation, and evidences of documents and chronicles are used as a basis for the message of the museum’s exhibitions and educational activities. The publication of the written historical sources provides an opportunity to analyse them in a detailed way. The most ancient documents, which have been created in Turaida in the 13th-14th century, were written on parchment in Latin and confirmed by attached wax seals of landlords and noblemen. In the end of the Middle Ages, starting with the 15th century, the letters in Turaida were written on paper in German (Middle Low German) and their number in the 16th century all the time increased. The book contains 497 texts from parchment documents, paper letters, chronicles, including, orginal texts of many documents and their translations into Latvian. They disclose history of Turaida, Latvia and Baltic Sea Region, show the point of view and values of noblemen and landlords of that time, the power relations and military battles, sometimes give insight into daily life of the people of the castle and castle district and the lower class.

The publiction contains information from writings, where the name of Turaida is mentioned in different contexts, also as geographical name (river, road). The studied documents refer also to the history of Gauja Livs to whom the Turaida hill fort with wooden stronghold was of great importance since the 11th century.  The name Turaida has originated form the Liv language, which belongs to the Finno-ugrian language family. It is related to the localized designation of the ancient Scandinavian god Thor (Tor) – a god of thunder, mentioned in the Chronicle of Henry of Livonia as Tharapita, the superior god of Oeselians (inhabitants of Saaremaa island). In the related Estonian language “aed” means “garden, ” consequently it can be translated as “Garden of god Thor” or “Garden of thunder god.” This name in the 13th-16th century has been written in different ways in Latin and Middle Low German, trying to imitate its sonority  – Thoreyda, Thoreida, Toreidhia and Torreyde. Until nowadays this place-name in the German language has been mostly written – Treiden or Treyden. In the Latvian language the first known document “Turraidas pilī” was created in 1810, but in the 18th century the local peasants named this castle “Turreda.”

Summary is published in English. E-book verssion see here (in English from page 360)