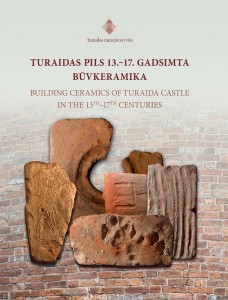 
Foreword
The collection and scientific archives of the Turaida Museum Reserve (TMR) store manifold historical evidences obtained during investigations of the historical centre of Turaida. To make the museum collections informatively richer and the results of research works available to society, following the initiative of Anna Jurkāne, Director of TMR, the study of historical documents and scientific inventory of artefacts obtained during archaeological investigation is being performed. This has resulted in publications and catalogues of the collection, which augment understanding of the investigation and preservation of the cultural heritage. Thus, in 2012, the catalogue The Krimuldas Ragana Hoard. Silver Ornaments and Coins of the Gauja Livs 10th–13th Centuries was published, but 2014 saw the edition of the collection of written historical sources, Turaida in Historical Documents of the 13th–16th Centuries. Essential material historical evidences were obtained during the complex archaeological expedition in Turaida Castle in 1976–2000. As a dedication to Jānis Graudonis on his 100th anniversary, in 2013, the Catalogue of the museum collection on stove tile ceramics of Turaida Castle in the 16th–18th centuries was issued, which is now followed by the Catalogue Building Ceramics of Turaida Castle in the 13th–17th Centuries.

In the studies and investigation of Turaida Castle’s building history and historical building materials a large contribution has been made by the long-term leader of Turaida archaeological expedition, Professor Jānis Graudonis (1913–2005). Alongside the archaeological investigation also the building inspection of castle ruins was made. The castle’s architect-restorer   Gunārs Jansons (1928–2013) performed brick measuring and mapping in all buildings and in ruins, made tables of brick length and attempted to use them for dating purposes, registered types of brick bond in various buildings of the castle and accurately measured several samples of building ceramics in order to elaborate most precisely the project of reconstructive restoration of Turaida Castle buildings. As a result, his summarising research was created on the masonry material of Turaida Castle complex (typescript of 1989 is kept in TMR scientific archives), as well as a monograph was published (2007). A decent work was performed in systematisation of bricks and roof tiles of various types from TMR building ceramics collection, when installing exibitions in Turaida Castle, especially the exibition “Building history of Turaida Castle, 1214–1776”.

As the preparation of the catalogue of building ceramics of Turaida Castle was started in 2013, the samples of building ceramics stored in the collection of TMR were re-inventoried, in 2014, by Dainis Bernhards, leading specialist of TMR. Footprints/paw prints of various animals on bricks were determined by the zoologist of the Latvian Nature Museum, Una Bērziņa. Art historian Ieva Ose chose 99 characteristic samples of building ceramics, described them and prepared the Introduction to the Catalogue. Mostly it is unknown in which buildings of Turaida Castle the bricks, roof tiles and floor tiles included in the Catalogue were laid in many centuries ago. Dating of the articles refers to lengthy time periods, since in the present stage of investigation, by finding conditions, shape of the articles, and analogies it is impossible to establish a more precise time of making.

The Introduction to the Catalogue Building Ceramics of Turaida Castle in the 13th–17th Centuries presents an insight in the development of building ceramics of Turaida Castle, and also in Latvia at large, the Baltic Sea Region, and Europe. A detailed summarisation of the documentary information on medieval Livonian brick-kilns, brick production and application in construction is given. Hence the Catalogue will be useful for investigators of Latvian museum castles, archaeologists, art and architecture historians. It will also serve as a source of information for guides of the Turaida Museum Reserve and visitors from close and distant lands.

Already for a long time TMR staff had knowledge of the memories of the local inhabitants and tales about the ancient site of Turaida brick-kiln that is situated within a kilometre northwards from the castle. In order to make clear whether the old folks’ tales are based on actual historical evidences, in July 2014, a trial excavation was made that provided astonishing results. In the excavation site in the northern part of Turaida Jāņkalns, an area of several square metres was uncovered containing a pavement of late medieval bricks, and also over a metre thick layer of brick fragments was found, and the defective articles of the brick-kiln. A short report about these archaeological finds is added at the end of this catalogue.

TMR expresses great thanks to all who were involved in the preparation and publishing of the catalogue Building Ceramics of Turaida Castle in the 13th–17th Centuries!