Catalogue. Baltic and Baltic-Finnic Antiquities in the Collection of Turaida Museum Reserve 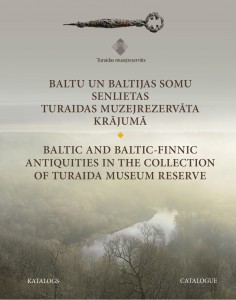 Catalogue. Baltic and Baltic-Finnic Antiquities in the Collection of Turaida Museum Reserve

The catalogue contains information in two languages – Latvian and English and it will be available in Visitors Centre of the Turaida Museum Reserve.

From Foreword by Guntis Zemitis: “An archaeological objects is not inanimate, if, after disinterring, it has come into the right hands. Quite on the contrary – from an inanimate, material object it becomes a live evidence of the past, bearing its qwn story. Each object is a small piece of the large mosaic that discloses the historical destinies of nations. The catalogue Baltic and Baltic-Finnic Antiquities in the Collection of Turaida Museum Reserve. The 3rd millenium BC – the 1st half of the 13th century demonstrates the objects thet allow to restore the history of one region of Latviaduring the period spanning more then four millenniums. The catalogue is the intermediary in making the artefacts more accessible to both the researcher and the interested persons in Latvia, as well as abroad. Doubtlessly, this will weave yet another new thread in the already rich and oenate history of Turaida region.”

CATALOGUE OF THE BALTIC AND BALTIC-FINNIC ANTOQUITES
Artefacts of the Late Neolithic, Bronze and Early Iron Age. The 3rd millennium BC – the early 1st century

Artefacts of the Iron Age and Early Middle Ages. The 1st century – the 1st half of the 13th century