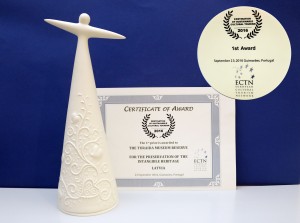 During the 9th interantional conference for Cultural Tourism in Europe which took place in Guimaraes, Portugal on 23 September 2016, on the theme “Intangible Heritage: Incomparable Asset for Sustainable and Responsible Tourism Development” the Turaida Museum Reserve was honored with the 1st prize award “Destination of Sustainable Cultural Tourism 2016” for preservation and popularization of Intangible Heritage. The second prize winner was the Theassaloniki Biennale of Contemporary Art, Greece and the 3rd prize was conferred to the Traditional Catalan Cuisine of Tossa de Mar, Spain.

In the substantiation of the application for competion the Turaida Museum Reserve emphasized its achievements in preservation of intangible heritage in the course of more than 35 years: popularization of Latvian folk-songs and traditional culture on Folk-song Hill; organization of Latvian annual custom celebrations, especially celebration of summer solstice, facilitation of Latvian traditions, customs and rituals; provision of the space for perfomances of Interantinal Folklore Festival “BALTICA”; popularization of the legend about the Rose of Turaida, maintenance of wedding traditions, demonstration of ancient blacksmith’s craft in cooperation with local blacksmith.

This award emphasizes respect of European Tourism industry towards Intangible Heritage, ideas, skills and values which have been formed in the course of centenaries. Our cultural heritage is something more than just memories about our past, it is a key to our future. European Commission has announced the year 2018  as the European Year of Cultural Heritage (EYCH). In this year even more attention will be paid to the possibility to enhance social and economic significance of cultural heritage and to popularization of European proficiency in this field.