The summer archaeological excavations in Turaida Church Hill are finished 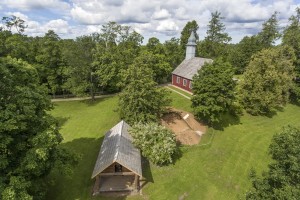 Archaeological excavations in the south-eastern corner of Turaida Church Hill medieval cemetery took place in July of this year. Their aim was to determine the boundaries of the ancient cemetery and the place of their enclosing fence so that in the future it might be restore in its original form. Unfortunately, in the course of this year’s research, the old fencing site or the remains were not found.

Research works in Church Hill started already a few years ago. In the past year underneath the mixed ground were found four undisturbed and two partly-buried burial grounds – two women, two men and two children, and one of the children was diagnosed with severe bone damage from tuberculosis, which apparently was also the cause of his death. The dead persons were buried very shallow – only in depth of one meter, four of them were placed in the same row. They were buried by the Christian tradition, in an extended position on the back, with head to the west, without additives. 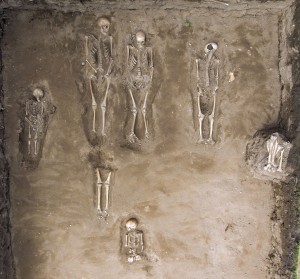 The found skeletal bones were studied by an anthropologist, Dr. hist Guntis Gerhards and PhD student of palaeoanthropology E.Petersone-Gordina. According to the results of their research, it can be concluded that in this place buried two women were around 19 and 60 years old, both 156 cm long. Two buried men were adults, about 172 and 176 cm long, and two were children 9 – 10 years old, 115 and 112 cm long. One of the children was diagnosed with pathological changes in bone associated with severe bone tuberculosis. For the burials investigated by Turaida, both women and men are considered to be dated as inhabitants of the 15th – 17th centuries. The study is supposed to continue. In order to confirm the fact of tuberculosis, the isolation of the pathogenic microorganism Mycobacterium tuberculosis DNA from the skeletal bone of this grave should be carried out and in its chronological order need to use the radioactive carbon method, and is possible to use stable isotope analysis of the bones as well. Bone samples have already been taken from all burials that could provide information about the diet of the ancient Turaida inhabitants. The planned analyses are possible to do in foreign laboratories – in the University of Cambridge, in Germany, and other places.

Next year, archaeological research in Turaida Church Hill is planned to continue.