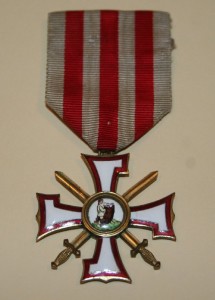 November 11 is the Day of Lāčplēsis – a commemorative day of the heroes who gave their lives in the Latvian War of Independence. The day when the soldiers of the Independent Latvian State Army won the battle over the troops led by von der Goltz and Bermondt-Avalov on 11 November 1919, driving them out of Riga. Already in the same year, November 11 was announced as the day of Lāčplēsis and during the years of Latvia’s Independence (1920-1940) annually on November 11 the fallen soldiers were honoured. It was not celebrated in the Soviet period. The day of Lāčplēsis as a historical commemeoration day was renewed again in 1988 and promoted with significant Public events.On 3 October 1990, in accordance with the Law of the Supreme Council of the Republic of Latvia on National Public Holidays and Commemorative Days, the day of Lāčplēsis was recognized as a commemorative day of   the fallen heroes.

The Military Order of Lāčplēsis was conferred on the Latvian Army  soldiers, the former Latvian Riflemen Regiments for special merits in the war and foreigners, who had helped  in the Latvian War of Independence or otherwise contributed to the establishment of the State of Latvia.   On 13 August 1920, the first Orders were awarded to the seven Supreme Commanders of the Latvian Army – P.Radziņš, M.Peniķis, K.Berķis, O.Dankers, J.Jansons, J.Puriņš and J.Apinis. In the course of its existence – from 1920 until 1928, more than two thousand insignia has been conferred from all three classes of the Military Order of Lāčplēsis.

The repository of the Turaida Museum Reserve stores a Military Order of Lāčplēsis, 3rd class, No 2072, which on 1 November 1928 was awarded to the wartime official of the “Green Army” –  Kārlis Degteris, son of Jānis. Kārlis Degteris was born on 3 May 1896 in Druviena parish,  graduated from Bulduri Horticultural School in 1914, joined the ranks of national partisans in the “Green” Army in March 1919. Fought against the Bolsheviks in the vicinity of Lielezere until May 1919, when the area was liberated by Latvian troops. On June 17, 1919, he joined the regular army. On 21-22 January 1919, in Kraukļi parish near Lēģeri farmstead, under the siege of the Red Army, Degteris headed the repellence of enemy and defence of the farmstead,  overcame tenfold predominance of adversary and led his people out of the siege without losses. On May 28, in Kraukļi parish, he headed a partisan group near Mente farmstead, which attacked a unit of the Bolsheviks. He continued his service after the War of Independence at the headquarters of the 3rd Latgale Division, then at the Aviation Regiment. Achieved the rank of Administrative Captain. Awarded several medals of the Order of the Three Stars, Class V. In 1940, he worked as an accountant in the design office of the Executive Committee of the Riga City. Arrested on June 14, 1941, exiled to Solikamsk Camp in Usollag. Sentenced to death in March 1942, shot dead on April 7, 1942 in Solikamsk (later in official response the KGB affirmed that he has died from pneumonia on November 20, 1944).

In 1928, only eight Military Orders of Lāčplēsis were awarded and the Order of the Museum’s collection has the penultimate number. The shape of the 3rd class Military Order of Lāčplēsis is a stylized cross (41×39 mm), which has a coating of white enamel with red and gold edging. On the medalion in the centre of the front side there is a picture of folk hero Lāčplēsis (Bear-slayer). In the angles of the cross there are crossed swords. The reverse side shows the date – 11 November 1919. The text engraved at the ends of the cross – “Par Latviju”(“For Latvia”). It should be worn on the left side of the chest, attached at the folded part of the ribbon.

Memory Eternal to the Heroes Fallen in the War!