The Most Beautiful Sigulda Railway Station Celebrates the 95th Anniversary

The EU has designated 2021 as the European Year of Rail to promote the use of trains as a safe and sustainable transport. Some words of local railway history. 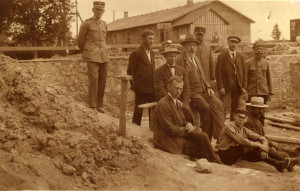 Station builders in the construction pit, a view from the northwest. In the central part is sitting the author of the project Pēteris Feders. In the background – a wooden temporary station building. 1925, photographer unknown

On 11 December 1925, a railway station was built in Sigulda in the national romantic style, which at that time was justifiably called the most beautiful railway station in Latvia.

The centre of Sigulda has been destroyed during World War I – the buildings of the first railway station, the hotel, the Vidzeme Switzerland Society have been burned down and many other buildings – damaged.

At the beginning of the 1920s, an agrarian reform was carried out in Sigulda Parish, during which about 700 ha of land were distributed from the nationalized Sigulda Manor. The plan of the Baltic-German architect Anatol von Maydell that only luxurious residential houses and summer houses would be built here did not materialized, because the land in Sigulda was acquired by local craftsmen, former servants of the manor and other low-income residents. Before the war, life in the prosperous resort was in decline, but in the 1920s, mainly on holidays, there was already a significant influx of tourists, mostly by rail. The hastily constructed building of a  temporary wooden station became too small, so it was decided to build a new fundamental station building according to the project of the well-known architect Pēteris Feders (1868 – 1936). He had graduated from the Architecture Department of the St. Petersburg Academy of Arts (1894), worked as Educator, Professor  in Warsaw Polytechnic Institute (1911-1918) and Architect at the Central Board of the Latvian Railway (1920/1921). He designed summer houses and private houses, also railway stations in Asari, Bēme, Reņģe, Sigulda. 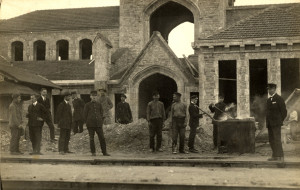 The new building of the station in the photo from the south by O. Lessiņš. 21 August 1925 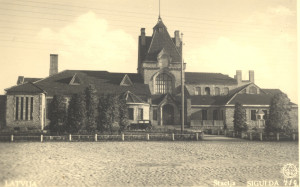 Station from the north, yard side. Late 1930s, photographer unknown

Already in 1919, the Central Board of the Latvian Railway launched its operation in Latvia, it was in charge of the 2714-kilometer railway line. Taking into account the experience of Russia and Finland, a freight tariff was developed. Passenger fares were determined according to the class of wagons and the number of kilometers travelled. There were various restrictions and fare reductions for soldiers, holders of the Military Order of  Lāčplēsis, border guards and police officers. In such a situation, the construction of a new railway station was started in Sigulda. In 1929, there were 262 stations and stops altogether on Latvian State railways – most of them were built on the sites of war-torn or previous stations. Also near Sigulda during the Republic of Latvia several large stone station buildings were constructed – in Inčukalns, Ieriķi, Cēsis, however, Sigulda station is considered to be the most beautiful. The  building manner unveiled the attempt to fit into the surrounding landscape, which altogether created a specially picturesque view. For holidaymakers travelling by rail from Riga, the new station building was a genuine “calling card” of Sigulda. It was suitable for holidaymakers – the station had comfortable waiting rooms, a summer garden on its east side, inside – a buffet, hairdresser’s and barber’s shop and other amenities. 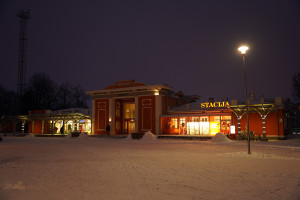 Station from the north, yard side. 2021. Photographer Agris Tabaks

Seventy years ago, in 1950, around the site of the previous station, a new station building was erected, in the so-called Stalin’s Empire style. It was a simpler building, but the propaganda in the tourist guides at the time heralded that a “new, more beautiful” building has been built. One of the water towers was also restored.

Currently, after the restoration and reconstruction works, this building, which is already the 4th  station in turn, continues to perform its functions and is used and accepted as an element of Sigulda urban design.