The Great Kristaps (St. Christopher) of Turaida – An Ancient Song in New Sounds

The Turaida Medieval Castle has a permanent exhibition “Stove Tiles – an Ancient Picture Encyclopedia”. Among the restored stove tiles of the Turaida Castle there is also an accomplishment by the restorer – old master Jana Lībiete – a stove tile reborn from pieces with an image of Saint Christopher or the Great Kristaps. What can this stove tile tell us, read in the article below. 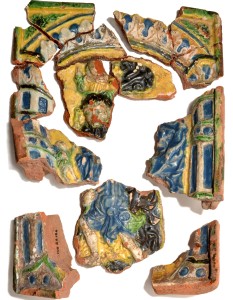 Fragments of the stove tile found in the archaeological excavations at Turaida Castle with an image of St. Christopher. Made btween the 1530s and 1550s

An interesting find in Turaida

Sorting, organizing and researching fragments of stove tiles found in the Turaida Castle excavations, particular attention was attracted by a group of stove tile pieces with a bearded man and image of a child sitting on his neck covered by  an expressive polychrome glazing. The boy’s raised right hand with two fingers raised up is a typical blessing gesture  that can be seen in many images of Jesus Christ. In the old works of art, Christopher, a holy martyr honoured by the Catholic Church, was depicted as a large man with the Child Jesus on his shoulders.

As they continued to group the fragments of  the Turaida stove tiles, they found there fragments compatible with the heads of a man and  boy, which gradually made a sense of the original composition. On a particularly large stove tile – around 36 cm high and 28 cm wide clay relief there is depicted a monumental portal with a luxuriously decorated pilaster on each side, which supports a flat arch with acanthus decor. In the middle of it, the giant Christopher in a fluttering cloak   with a child on his shoulders. He has clutched the stick in his right hand and barefooted  crosses the dark and wavy stream. In order to reproduce the effect of movement, the right leg of the giant is bent in the knee and lifted above the surface of the water, while the outstretched left foot rests on a solid basis. The width of the river is indicated indirectly by a small figure of a man standing on a faraway bank, with a lamp in his raised hand.

The architectural motifs used in the stove tile’s decor clearly point to the Renaissance, the features of which occur in the territory of Latvia in the second third of the 16th century. Why was Christopher, saint martyr honoured by Catholics, depicted on the Turaida stove tile in the time after Reformation? 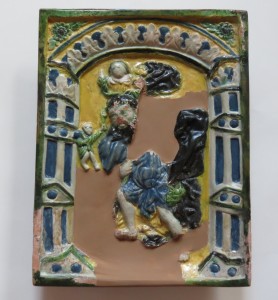 The Turaida stove tile with an image of St.Christopher. Restored by old master Jana Lībiete

The Legend about Saint Christopher

Christopher, called among the people the Great Kristaps, is related to a wooden sculpture exhibited in the Museum of the History of Riga and Navigation – more than 2 metres tall, heavyset man with a small boy on his sholder and to the legend about the man, living long ago on the bank of Daugava, who carried people across the river. This historical legend of Riga has originated from localizing the tale about Saint Christopher of Catholic Church.

From the 5th century there is known  a Greek legend about Christopher, spread among both Eastern and Western Christians. Explaining his origin, the Orthodox Greeks and Russians depicted him in the icons as a Dog Headed Man. Catholics on the contrary translated name Christopher literally form the Greek language in which it means “Carrier of Christ” and depicted him as a giant with a child on his shoulder or arm. The popularity of his miraculous life story facilitated the collection of Golden Legends or the Lives of Saints, written between 1263 and 1273 by the later Archbishop of Genoa, Jacob of Voragine.

Legend tells that Christopher was a heavyset and very tall man and he wanted to serve the most powerful ruler. His first king, a Christian, crossed himself when he heard the devil’s name in the song because he feared devil. Then the giant decided to serve the devil, but also he ran away when he saw the cross, the sign of Christ, on the roadside, The giant started to search for Christ and came to the hermit, who suggested him to carry people across a deep river, that was the best  way how the giant could serve Christ. Once at  dark night a little boy called the giant to carry him accross the river. The giant took a strong pole for support and started to cross the river. But in the middle of the river, the water started to swirl and the child  became so heavy that the giant only with great efforts reached the other bank. Then he said to the child: “You brought me into big danger and was so heavy that  I thought I was carrying the whole world  on  my shoulders.” The child replied: “You carried not only  the whole world, but also its ruler. I’m Christ to whom you serve. In order to make  you believe that I am speaking the truth, insert your stick in the ground next to your hut – it will turn green in the morning  and bear fruit.” So it happened, and since then the  giant was called Christ’s carrier – Christopher.

Like other Catholic saints, also Christopher became a patron saint of several professions. He was honoured by rafters, ferrymen, porters, pack carriers, boatmen and seafarers, seamen and pilgrims, who often were in danger travelling by water. Gardeners and children honoured him as their patron saint. His protection was invoked against sudden death, e.i. death without receiving Holy Communion. The above mentioned contributed to the spreading of Chirstopher’s images in the 15th century  both on the church walls and small graphic pages. 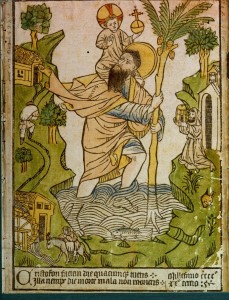 St. Christopher. Wood carving, 1423. The caption in Latin says: “The day you see Christopher’s face, you will not die in sudden death”.

In the 16th century attitude towards Christopher changed. The remarkable Dutch humanist Erasmus of Rotherdam in his satirical work “Praise of Stupidity”(1509) has already mocked the superstitions of ordinary people – uncritical trust in the strength of daily prayers to Christopher. But a decisive blow to reducing  popularity of Catholic saints was given by the Reformation.

In 1517, Martin Luther nailed his 95 thesis to the Church Door in Wittenberg, criticizing the selling of indulgencies in the Catholic Church and the enormous luxury. So started a reformation movement that categorically opposed the honouring of holy martyrs. But Christopher was one of the few saints that Luther used as an allegory. In his “Table Speeches” he emphasized that the ancient legend about Christopher should be understood as a similarity with a real Christian. Namely, he must be like a large strong man that is able to carry Christ. The Child Jesus was so heavy because he had to bend down and feel humility in front of Him. The storm and insurgent waters mentioned in the legend should be understood as storms of life and unexpected turns, resistance to tyrants and devil’s temptations. Christopher’s strong stick is symbolizing the strength of God’s Word, but the old man on the bank with a burning lamp in his hand are writings of prophets that must be followed in order to reach the bank, i.e., eternal life unscathed.

This allegorical interpretation by Luther was the reason why Christopher with a Jesus Child  on his shoulder was depicted also after the Reformation.

Was the Great Kristaps of  Turaida a “Catholic” or a “Lutheran”?

In Livonia Christopher’s cult gained more popularity during the reign of the Archbishop of Riga Jasper Linde (ruled 1509-1524). In the introduction to the Riga Breviary, written in 1513, it is noted that the Archbishop has announced the feast day celebrations  of the servants of God – Saint  Blaise, Saint Christopher and Saint Egidio when they should be honoured. The feast of St.Christopher is celebrated on July 25. It is at the same time as the Day of Remembrance of the Apostle James, perhaps because they were both patron saints of pilgrims.

However, during the rule of the Archbishop  of Riga Jasper Linde, the stove tile with Christopher’s image could not yet arrive in Turaida. As mentioned above, it is stylistically younger – made not earlier than the the second third of the 16th century. At a time, when the next Archbishops of Riga – Thomas Schöning (1528-1539) and Wilhelm Margraf von Brandenburg (1539-1563) ruled, the Lutheranism has already won in Livonian cities, but officially the Archbishops remained Catholics. However, it should be noted that Wilhelm’s brother, Albrecht von Brandenburg, was the  last Grand Master of the Teutonic Order, who became the first Duke of Prussia  in 1525 and converted to Protestantism. It was his diplomacy that helped Wilhelm to become Coadjutor Archbishop of Riga. When Archbishop Thomas Schöning died, Wilhelm von Brandenburg became Archbishop of Riga. During Wilhelm’s reign, between 1540 and 1550, Lutheranism finally consolidated in Vidzeme.  It is known from the documents that in 1540 Wilhelm von Brandenburg invited to Livonia pastors educated by Martin Luther himself. Therefore it seems most likely that it is Archbishop Wilhelm von Brandenburg  or the manager of the Turaida Castle, who, in the 1540s, fulfilling his instructions ordered polichrome stove tiles with Christopher’s image. Thus the buyer of the “Great Kristaps” of Turaida  was, if not, convinced Lutheran, then at least one who symphatized with the Reformation.

It can be added that a few more Turaida stove tiles made in the second third of the 16 th century show a clear sympathy for Lutheranism. They depict portraits of two German rulers – Johann Friedrich, Duke of Saxony and Philipp, Landgrave of Hesse, the members of the Schmalkaldic League, founded in support of the Reformation. This is why I would like to think that the “Great Kristaps” of Turaida, made around the same time, is connected with the spread of the Reformation movement in Livonia and is to be perceived as an allegory of Lutheranism.