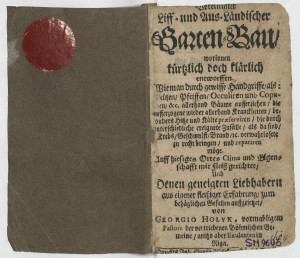 Front page of the book by Georg Holyk “The United Horticulture of Livland and Foreign Countries” Riga, 1684.

In 1684, the first edition of Georg Holyk’s book on gardening “Vereinigter Liff – und Aus-Ländischer Garten-Bau” (“The United Horticulture of  Livland  and Foreign Countries”) was published in J.G.Wilken’s printing-house in Riga. Until today, only two copies of these rare books have preserved in the Baltics, and one of them is stored in the Turaida Museum Reserve.

Academician Jānis Stradiņš in his monograph “The Beginning of Science and Higher Education in Latvia” (Riga, 2012), speaking about the “free” scientists (working outside scientific institutions) in Riga at the end of the 17th century, also mentioned Georg Holyk, a Czech natural science researcher, who invented the most important techniques used in fruit-tree grafting– e.i. whip grafting and  triangular grafting. On the basis of his practical experience, Holyk also described ways of combating fruit-tree diseases, pests, gathering and storage of fruit, etc. His merits in gardening were duly evaluated only in the 20th century, certainly, first of all in his home country – the Czech Republic. In 1937 and 1940, two books of Czech biographer Miloš Bohuslav Volf were issued in Prague on Holyk’s life and intellectual heritage, the first in French, the second in Czech.

From then on, the Czech society’s interest in Georg Holyk has only grown. In the sixth volume of the collected articles ““Из истории естествознания и техники Прибалтики” (“From the history of natural sciences and engineering”), issued in Riga in 1980, the historian of science and engineering T. Romanovsky, on the basis of the information provided by M. Volf and other materials, gives an overview of the life and scientific activities of this gardener. The latest information on Holyk, particularly on the final phase of his activities in Riga, can be found in the book of the Czech historian Pavel Štoll “Latvian culture and Moravian Church” issued in 2016.

The Turaida Museum Reserve has started preparations for publishing the book with a translation and comments in Latvian. Financial support has been provided by the Ministry of Culture of Latvia, allocating funds for research work in a special purpose programme. By attracting the most competent scientists in Latvia, contracts with four freelance authors for research, advice and editing of translation have been concluded. Latvia’s leading researcher in fruit-growing Dr. agr. Māra Skrīvele will study the discoveries of G. Holyk in the fruit-tree grafting and advise on the terminology of translation, a philologist and book-publishing historian, Dr. phil. Pauls Daija will prepare a publication on the dissemination of horticulture knowledge in Latvian books from the second half of the 18th century to the middle of the19th century, lecturer at Charles University in Prague – Dr.hist. Christine Ante will prepare a publication on the evaluation of Holyk’s contribution to the Czech cultural space, while Sylvia Pavidis, Dr. phil. in Germanic Linguistics will edit the translation from German. The book will be translated by the chief specialist of the Turaida Museum Reserve, Dr hist. Edgars Ceske.

For insight, a few more biographical details about Georg (Jiŕi in Czech) Holyk. Miloš Volf, analysing various sources, found that Holyk was born in 1634 or 1635 in a small village of the middle part of the Czech Republic. At the age of eleven, he was sent against his will to the Catholic School. After leaving school, in 1655, he entered the Dominican Order and served as a clergyman.

However, Catholic denomination did not seem acceptable to the young man. He fled to Germany, where he converted to Protestantism, later becoming pastor of the Moravian Church in exile in Barby near Magdeburg. In 1671, he went to Sweden and Finland to collect funds for the congregation of the Moravian Brethern. However, soon afterwards, he decided to resign from the clergyman’s post and devote himself to the gardening, which he loved since early youth. According to M. Volf, he got gardener’s job in Köningsberg “at some aristocrat, probably a Czech exile”, where, in 1678, he invented new grafting techniques – whip grafting and triangular grafting. He went to Riga with a hope to expand his trials, but his plans to find a job were not justified at first. Holyk ran into great financial difficulties – he was forced to survive by working even as rat-catcher. Eventually, the gardener had an opportunity to focus on his favorite work.  In Riga, he carried out experiments in fruit-tree grafting, achieving high results and finally obtaining support from the Riga Town Council.

He shared his rich experience in two small books: in the above mentioned “Vereinigter Garten-Bau”( The United Horticulture) (1684), in which he  also several times  mentioned  horticulture experiences in Vidzeme and in the Duchy of Courland, and “Versprochenes Blumen und Küchengarten Büchlein” (“The promissed book of flower and vegetable garden”) (Riga, J. G. Wilken’s printing-house, 1687). Unlike the thick folios of those times, which were  saturated with quotes from ancient authorities, often in Latin,  Holyk’s books were written in simple language and contained  a small number of pages, the first one 84 pages, the second one 94 pages. Besides, the books are based almost exclusively on personal experience. Because of the small format, they could easily be carried in your pocket.This was the reason why the books became very popular; the first of them had even nine editions in Germany, the last time it was edited in 1750. However, due to its popular science rather and not academic nature they did not meet a resounding success from the specialists, and later Holyk’s discoveries were often attributed to other scientists. The support received by Holyk from the Riga Town Council and several wealthy traders whose gardens were located in the suburbs, also led to conflicts with local gardeners.

Georg (Jiŕi) Holyk died in Riga around 1710, obviously from plague. It is highly probably that he was also buried in Riga, but his gravesite remains unknown. The book will be reissued in 2022. We hope it will arouse interest not only among science researchers, horticulture and cultural historians, but among all those interested in the ecological way of life and will become another example of cultural relations between the Czech Republic and the territory of the present-day Latvia, or, as Mr Volf writes, “our relationship with the Baltics”, which started more than 300 years ago.