Archive of Archaeologist Jānis Graudonis in the Turaida Storage Facility 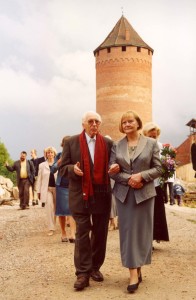 Director of the Museum Reserve Anna Jurkāne and archaeologist Jānis Graudonis on his 90th anniversary. 23 August 2003

One of the sections of the scientific archives of the Turaida Museum Reserve embodies the Archive of the distinguished archaeologist and public figure Dr.habil.hist. Jānis Graudonis (1913-2005). Dr hist. Guntis Zemītis, Chair of the Division of Social Sciences and Humanities of the Latvian Academy of Sciences has been undertaking scientific treatment of this archive for several years. Guntis Zemītis, according to the director of the Turaida Museum Reserve Anna Jurkāne, is a student and scientific heir of Jānis Graudonis – archaeologist of the Turaida Castle. He gained valuable training and experience through archaeological fieldwork at Turaida Castle under guidance of Jānis Graudonis.

Archive’s documents, correspondence, manuscripts and other sources provide an insight into the work of archaeologist in the Soviet regime, during the period from the death of Joseph Stalin (1953) until the restoration of Latvia’s independence (1990). The preserved manuscripts of scientific articles, collected articles, monographs, reviews, correspondence with institutions and individuals reveal the invisible side of the Soviet regime – the control mechanism, censorship, and attempts to evade them.

The second part of the archive describes the public activities of Jānis Graudonis during the Awakening of the Latvian people and in the first years after the Restoration of Independence, gives an insight into the creation of several public organizations, reveals little-known pages in their activities, the realized and unrealized intentions, many of which have not lost their relevance even today.

Work on the study of the archive continues, the Turaida Museum Reserve, from time to time, prepare information on the facts obtained during the course of the research. The Archives of Jānis Graudonis keep evidence on the life and work of one person and the era in which he worked. Supposedly, it will be of interest for different researchers like archaeologists and historians.