Since the mid-20th century, archaeological excavations have been taking place in the area of the Turaida Castle and its closest surroundings during which a significant and diverse collection of antiquities have been found. The collection of finds also encompasses 238 coins that are included in the Catalogue “Coins Unearthed in the Archaeological Excavations at Turaida Castle, 2nd, 11th-19th Centuries” published by the Turaida Museum Reserve in 2015 (compiled by Tatjana Berga). 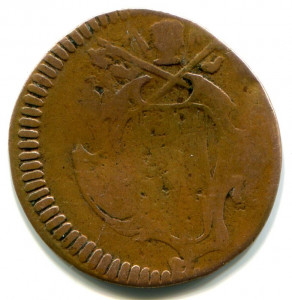 One of the unique finds is the coin – quattrino of the Pope Benedict XIV (Benedictus Quatrus Decimus, 1675–1758) unearthed in the area of the Turaida Castle. The coin is made of copper with a weight of 1.53 grams, 20 mm in  diameter. It was struck in Ravenna, without date. One side of the coin (obverse) bears the personal papal coat of arms (each Pope had such coat of arms). On all papal coats of arms there was an image of papal tiara (a 3-tiered crown of Pope) and gold and silver keys, which symbolize the spiritual power of Pope on the earth (silver) and in heaven (gold). The reverse side bears the image of St. Apollinaris holding a long cross in his left hand. The abbreviation S. AP. P. RAV. (Saint Apollinaris. Ravenna). Coins were struck not only in Ravenna, but also in other cities of the Papal States. 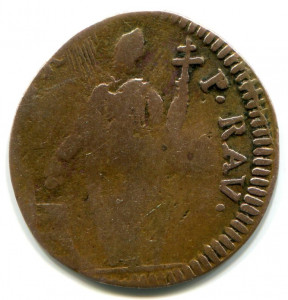 A quattrino, in the mid-18th century, was the smallest coin in the Papal State. Actually, the name have come from the Latin word “quatro” – four, which meant that the quattrino consisted of four Roman denarii, however, the denarius had already devalued so much in the mid-18th century that it had been withdrawn from circulation. Quattrino was the smallest real money unit.  Five quattrini were equal to one baiocco; the exception was only Bologna, where one baiocco was equal to 6 quattrini. Hundred baiocchi were equal to one Roman scudo, a coin containing 26.3 grams of pure silver and was roughly equivalent to a ducat (ducato) of the Holy Roman Empire (Reichsthaler): 25-26 grams of silver.

Quattrini, according to Tatjana Berga, “were not used in the local (i.e. the Baltic) currency circulation, most probably it could be brought by a pilgrim”.

Who was the pilgrim who brought this coin to Turaida? We do not know that, and we will probably never know. However, until nowadays an exceptionally valuable source has preserved – a contemporary of this quattrino. It is the European Travel Journal (1752-1757) written by Riga Doctor Nicolaus von Himsel (1729-1764), which is stored in the Academic Library of the University of Latvia.

According to tradition, starting with the 16th century, the sons of aristocrats and wealthy townspeople after finishing their studies travelled through Europe for several years – to learn good manners and establish useful connections for the future. This type of travel is described by historians as the Grand Tour. 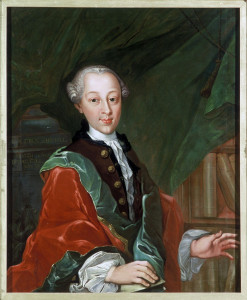 Unknown artist. Portrait of Nikolaus von Himsel. The Museum of the History of Riga and Navigation

In the case of Nicolaus von Himsel, special emphasis  was placed on learning about various collections of minerals, living nature history, archaeology, numismatics, paintings, medals and other collections, then the so-called cabinets and libraries. During his travels, Himsel also met some of the most prominent scientists and writers of the time, including the world-famous Swedish botanist and founder of taxonomy Carl von Linné (1707-1778) and the French enlightener Jean Jacques Rousseau (1712-1778). Before his death (he died at the age of 35, having contracted an infection from a sick man), Nikolaus von Himsel bequeathed the collections he had acquired on his Grand Tour, together with his extensive library, to the city of Riga.

Later, the so-called Himsel Museum was created – the first museum in the Baltics, which in its turn became the principal source of three large museums in Latvia: the Museum of the History of Riga and Navigation, the Latvian National Museum of Art and the Latvian Museum of Natural History.

Nikolaus von Himsel stayed in Rome for less than two months in total, from mid-February to 10 March 1754 and from 12 April (Easter) to 12 May of the same year. He has left relatively detailed information on the personality and activities of Pope Benedict XIV, which is partly in line with the information available in the reference sources, partly supplements it.

An audience with the Pope at those times  was the highlight of a visit to the Eternal City; it was sought by all eminent and wealthy travellers who came to Rome and it was available to almost all of them. In fact, in a letter written from Venice to a friend on 22 May 1754, Himsel gives a hint that without giving a bribe to the papal clerks he could not make it: “The audience with the Holy Father was arranged for me by the chamberlain Locatelli.

For that honour, I had to pay a lot with good wishes to a large number of papal servants”. The greatest psychological challenge for him as a Protestant, however, was kneeling, which is why he tried to do it as formally as possible: “[…]  the kneeling seemed particularly difficult to me as to one who did not belong to the true faith, and so the first two times I knelt with my knees half bent and only the third time I did it in a fully bent position.

After a short address, partly to me and my companions and partly to the Romans present, he enquired  if I was asking for mercy, I felt the holy hand on my head with the words of blessing: “Je vous donne ma sainte Benediction, mon fils” [“I give you my blessing, my son” – French].

Can I really not be proud: shortly before, I kissed the hand of the King of Naples, and soon afterwards, the shoes of the Holy Father!”

Nikolaus von Himsel visited not only Rome and Naples, but also Bologna – native city of Pope Benedict XIV, Florence, Venice, Milan, Turin and other Italian cities, bringing back not only art objects, herbaria, mineral and fossil specimens, but also new impressions and insights to his native Riga. They enriched Latvia’s cultural history and contributed to the Baltic provinces of the Russian Empire becoming more and more integrated into European culture.