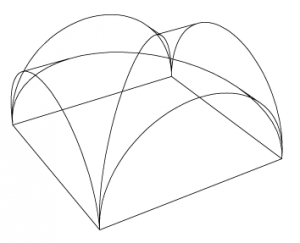 Scheme of the groin vault

A vault is an arched structure of masonry, forming a ceiling or roof. Vaults are constructed of stones or bricks using lime mortar as a binding agent. Vaulted rooms are more pleasant than rooms with plain horizontal ceiling because the upwards striving vaults give a feeling of height, spaciousness and security, magnificence, and uplift. The vaulting in the room is reminiscent of the high sky above the slender tree forest, that is why the term ‘vault of heaven’ is sometimes used in belles-lettres.

The medieval Turaida Castle was destroyed in a great fire of 1776, when all wooden ceilings burnt down and collapsed. However, a vaulted ground floor room has preserved through the centuries in the southern part of the crumbling castle in the tower-shaped dwelling block. In 1979, during the archaeological research the building remains were excavated, uncovering a unique example of late 13th or early 14th century architecture, which can now be seen in its restored form. Before looking at the vaults more closely, one can recall the special terms.

The oldest form of arched masonry construction is the barrel vault. When two barrel vaults intersect at right angles, groin vault is formed, resembling the letter X in horizontal projection.

The part of the space covered by a single groin vault is called a bay. As the vault is self-supporting, its entire weight is concentrated in the four edges – the X ends. If a support or column is placed at each of these four points, the wall should not be built between the separate vaults. In this way, medieval architects were able to create a forest of columns – a vast space divided by vertical supports, such as those found in Romanesque and Gothic cathedrals. In palaces and secular buildings inhabited by the nobility, several rooms were also covered with spacious vaults. 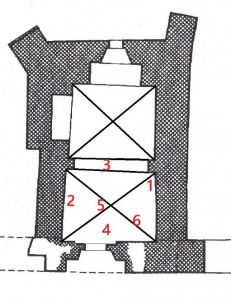 Each part of the groin vault has its own architectural term. A vault spring (1) is the lowest wedge-shaped element – stone, or brick, where the curve of the vaulted cover begins. A face arch or wall arch (2) is an arch, with which the vault joins to the wall. A transverse arch (3) separates one vaulting bay from the other. The curved areas between the arrises or sharp edges underside of a vault are called vaulting compartments (4). The vault crown (5) has been set at the highest point of the vault, where the two diagonal arrises (6) intersect. They connect vault springs located at opposite walls of the room. Groin vaults with semi-circular arches were used in Romanesque architecture, whereas in Gothic architecture, there have been cross vaults with pointed arches. 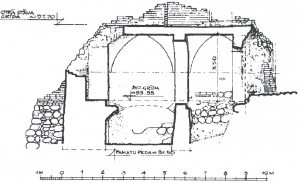 Longitudinal section of the Southern Block ruins and the view of the west wall. The pointed face arch is clearly marked in each bay. Measured and drawn by Gunārs Jansons in 1980

After familiarising with architectural terms, let’s turn our attention to the vaults of the Tower-shaped Southern Block of the Turaida Castle. On the ground floor, an elongated room is built, divided into two bays by a wide transverse arch. Each bay is covered by a groin vault with slightly raised arrises. The height of the room up to the vault crown is almost 3.5 metres. Sometimes a vaulting of two bays is called a double vault. However, this term is ambiguous, as it is also used for the ceiling of a room with two vaults one above the other. The groin vaults create an uplifting, medieval feeling in the room, complemented by the pointed-arch window niche in the back wall. Both the walls and the vaults were made of large red medieval bricks bound with lime mortar.

Unfortunately, no building projects of the Turaida Castle have survived from the Middle Ages. We can only imagine how, some 700 years ago, a medieval builder, with an architectural compass in his hand drew a plan of the ground floor of the Southern Block – on the land surface or on a piece of parchment, at the same time planning a vaulted cover for it.

The room was originally divided in two parts, with a brick support protruding in the middle of each longitudinal wall at floor level, which higher transformed into the transverse arch. In each of the bays in the corners of the room, about a metre above the floor, vault springs and face arches begin. Profiled bricks with a wide angled end were used for the arrises of the vault. The vault crown is visible at the intersection of the diagonal arches when the head is tilted backwards. The vaulting compartments are made of binders – bricks laid with their narrower end in the wall. The brickwork looks rather perfunctory, as the binders are laid in uneven rows, some of them are laid flat and others on their sides. The vaults were originally covered with plaster, fragments of which still have preserved in some places. 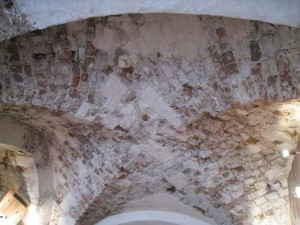 Groin vault in the southern bay

After restoration, the vaults are lightly whitewashed. Perhaps the ancient vault mason knew that the vaults would be plastered and therefore laid the bricks in the vaulting compartments without any special pattern? Or he did not have yet the experience to make an even filling for vaulting compartments? It should be remembered that during the construction, the mason’s view of the prospective vaulted ceiling was completely obscured by wooden scaffolding, as the groin vault becomes self-supporting only when the mortar has hardened.

For unknown reasons, the ground-floor room of the Southern Block of the Turaida Castle, located on the edge of the slop of the building site, has an irregular layout – neither of the two bays has perfectly formed right angles at the corners. The vaults are also peculiar. The wide transverse arch and the face arches at the northern and southern walls are semi-circular, but there are pointed face arches at the western and eastern walls of each of the bays.

When, in 1980-1982, the architect Gunārs Jansons (1928-2013) carried out building research of the Southern Block and developed the restoration ad reconstruction project, he also made assumptions about the peculiar vaulting. In his opinion, the pointed arches were not made in the end walls and in the transverse arch, due to the reason, that then the room should be built excessively high. In Western Europe, groin vaults with a simultaneous use of semi-circular and pointed arches are usually attributed to Romanesque architecture. However, after building research of the Turaida Castle it was concluded that the use of a pointed arches in the side walls clearly indicates the early Gothic style, and the Tower-shaped Southern Block could have been built in the late 13th or in the early 14th century. Today’s researchers try to find explanation and substantiation for each architectural form, but the ancient builder was unlikely to have thought of the Romanesque style transition into the Gothic, or of the semi-circular arch and the pointed arch as a feature of architectural dating. This led to the creation of the groin vault with arrises, which is not only Romanesque but also the earliest form of Gothic vaulting. Later Gothic architecture used cross vaults with ribs. The Turaida Castle also has had Gothic rib vaults in some rooms, from which red large-format profiled bricks have been excavated. Unfortunately, these vaults have not survived until today.

The groin vaults with arrises of the Tower-shaped Southern Block of the Turaida Castle are a unique example and an important testimony to early Gothic architecture in Latvia because there are only few well-preserved medieval stone buildings in the country.