The 100th Anniversary of the Constitution of Latvia 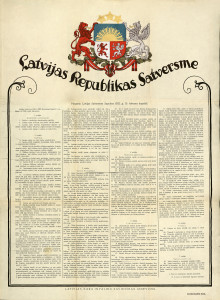 The Constitution of latvia (Latvian: Satversme), 1922

February 15 this year marks exactly 100 years since the adoption of the Satversme of Latvia – the country’s constitution or fundamental law.

The Turaida Museum Reserve holds a set of shorthand record publications of the Constitutional Assembly of Latvia. The Constitution of Latvia is also mentioned in the exhibition “On the Way to Establishment of the State of Latvia. Corvée-peasant. Independent Framer. Citizen”.

The Constitution of Latvia was promulgated on 30 June 1922 in the official newspaper of the Republic of Latvia Valdības Vēstnesis and entered into force on 7 November 1922. The Constitution strengthened the Latvian statehood and legal system. Its adoption gave legal effect to the right of the Latvian people to self-determination. The fact that Latvia, even after the restoration of independence, did not draft a new constitution, but restored the functioning of its only Constitution, should be regarded as a unique phenomenon. The Satversme of Latvia is one of the oldest constitutions in Europe – only eight European countries have older constitutions in force.

Origin and use of the concept of Constitution (Satversme)

The word “satversme” was coined by Atis Kronvalds, one of the leaders of the Young Latvians movement. As early as 1869, Atis Kronvalds proposed to use the Latvian word “satversme” instead of “konstitūcija” (this foreign word might have been incomprehensible to the people, most of whom were peasants at that time), because “people have therefore adopted laws that they have a place to hide in times of need”. To commemorate the great contribution of Atis Kronvalds to linguistics and national education, including his programmatic speech at the Vidzeme Teachers’ Conference in Turaida on 2 July 1869, a monument to him by sculptor Teodor Zaļkalns was unveiled on 18 November 1938 at Sigulda New Castle.

The first theoretical article on the concept of the Constitution (“What is Satversme?”) was published in Latvian by Jānis Pliekšāns (Rainis), using mainly a new word coined by A. Kronvalds. In Latvian legal terminology and political discussions in the first half of the 20th century, the word “satversme” was used as a generic term denoting both constitutions in general and specific constitutions of certain countries.

In parallel, the understanding of the name Satversme as a Proper noun was also developing, denoting a specific constitution that was required for the People of Latvia in the future. In their various constitutional models of Latvia as an autonomous or independent state, the term “satversme” was used by Miķelis Valters, Marģers Skujenieks, Fēlikss Cielēns, Pēteris Zālīte, and other Latvian publicists.

It is interesting that the same new name coined by A.Kronvalds was also used by the politically alternative powers. For example, the official title of the basic law of the Bolshevik regime established by Pēteris Stučka in 1918/1919 was the Satversme of the Latvian Socialist Soviet Republic. It was adopted on 15 January 1919. Since the second half of the 20th century, the word “Satversme” is no longer used as a designation for any constitution but refers specifically to the Constitution of the Republic of Latvia.

The origin of the Constitution of Latvia

Putting sovereign power into the hands of the people was in line with the basic principles of a democratic state.  It is noteworthy that the Declaration did not refer to “Latvians” but to “the People of Latvia”, including all citizens of the new state.

On 5 May 1920, the Constitutional Assembly of Latvia established a separate Constitutional Commission of 26 deputies. The composition of the Commission’s staff shows that it represented a wide range of socio-political forces as well as ethnic minorities.

It consisted of the Latvian Social Democratic Workers’ Party (Latvian abbreviation: LSDSP) faction deputies: Jānis Pliekšāns (Rainis), Pauls Kalniņš, Fricis Menders, Fēlikss Cielēns, Oto Nonācs, and Īzaks Rabinovičs; Jānis Goldmanis and Alberts Kviesis from the Latvian Farmers’ Union; Markus Gailītis from the list of the Non-party Group of Landless Peasants and Small-holders; Juris Pabērzs and Staņislavs Kambala from the Latgale Framers’ Party; Francis Kemps from the Latgale People’s Party; Arveds Bergs from the Group of Non-party Citizens; Pauls Šīmanis from the German Party; Aleksandrs Bogačovs from the Russian Citizens’ Group; Jakovs Helmans from the “Ceire Cion”(Youth of  Zion) Party and others. The Chairman of the Constitutional Commission for the entire period of its operation was Marģers Skujenieks (initially from the LSDSP, since 1921 – from the LSDSP Minor Party faction).  The preparatory work for the drafting of the Latvian Constitution lasted for more than a year.

On 20 September 1921, when the Constitutional Assembly met for its fourth session, the rapporteurs Marģers Skujenieks and Jānis Purgalis gave an overview of the work carried out by the Commission. The draft, which was adopted and promulgated by the Constitutional Assembly almost unanimously (there were no dissenting votes) at its joint meeting on 15 February 1922, consisted of seven chapters: 1) General Provisions; 2) Saeima; 3) The President; 4) The Cabinet; 5) Legislation; 6) Courts; and 7) The State Audit Office. All these chapters formed Part I of the Constitution of Latvia.

The first four articles of the Satversme were the least objectionable: 1) Latvia is an independent democratic republic; 2) the sovereign power of the State of Latvia is vested in the People of Latvia; 3) the territory of the State of Latvia, within the borders established by international agreements, consists of Vidzeme, Latgale, Kurzeme and Zemgale; 4) the national flag of Latvia shall be red with a band of white.

A fairly high degree of consensus also prevailed in the selection of a Latvian term for the highest national legislative authority – the parliament. It was unanimously agreed that the Saeima shall be elected in general, direct, equal elections by secret ballot, based on proportional representation. In contrast, the issue of the minimum voting age sparked a lively, even acrimonious debate. The Social Democrats argued in favour of setting the threshold for the age of the electorate 20 years, while even 21 years did not seem sufficient for the members of the civic parties. In the end, it was agreed that the right to vote should be granted to citizens of both sexes over the age of 21 on election day.

Disagreements also arose at the Constitutional Assembly on the Saeima’s term of office. The Social Democrats’ proposal was for a two-year term, but the preponderance of members of the civic party ensured that the Saeima shall be elected for three years. The issue of revocation of the members was also of fundamental importance. A narrow majority ensured that an elected Member of the Saeima shall not be revocable. Speakers from all factions at the Constitutional Assembly talked much and eagerly about democracy and its provision in the new state, about the protection of the rule of law. It was decided that the Saeima has the right to submit requests to the Prime Minister or individual ministers for their activities. The parliamentary immunity and other guarantees of immunity, which parliaments in Western countries had granted to their members, were also provided to the members of the Saeima.

The fate of Part II of the Constitution

Eventual prototypes of the Constitution of Latvia

Assessment of the Constitution from the right-wing political forces. Authoritarianism

The Constitution of Latvia entered into force on 7 November 1922 at 12 noon, when the First Saeima of Latvia met simultaneously. The variegated composition of this and subsequent Saeimas and the resulting difficulties in establishing stable and operational parliamentary governments, as well as the frequent changes of Cabinets, contributed to the perception that the Constitution was not functioning properly. The slogan “The Saeima is not working well, the Satversme is not working well!” was first put forward by Arveds Bergs, one of the most active members of the Constitutional Commission, in the newspaper Latvis on 23 December 1922. In fact, throughout the whole period of parliamentarism in Latvia, the right-wing parties tried to get the Constitution revised, replacing the parliamentary system with a semi-presidential or presidential administration. It was proposed to increase the powers of the President of the Republic and to elect the President of the Republic in a direct election. The catalyst for these views was the general political context in Europe, especially during the Great Depression and shortly afterwards, when parliamentarism was defeated in several European countries and replaced by more or less authoritarian regimes. Criticism of the Saeima also served as a cover for the coup d’état by Prime Minister Kārlis Ulmanis on 15 May 1934. After the coup, K. Ulmanis promised constitutional reform but failed to implement it, turning the republic into a state with legally unlimited leadership. The Constitution was not suspended or abrogated, but its actual political impact was minimal.

In June 1940, the USSR occupied and later annexed Latvia and the other Baltic States. The so-called “democratic elections” held between 14 and 15 July were not legitimate because of the presence of foreign troops in Latvia; moreover, the Communist list of the “Working People’s Bloc” was approved in Moscow and the nomination of other party lists was practically not allowed. Even more anti-constitutional was the decision of the newly elected “People’s Saeima” to ask the Supreme Council of the USSR for Latvia’s accession to the USSR, which was executed on 5 August. According to Latvia’s Constitution of 1922, a referendum of the whole nation was compulsory to amend the state system.

After the occupation of Latvia, the diplomatic service and consular post of the Republic of Latvia protested against the actions of the USSR, which was not recognised by many major powers. As the Latvian people had not freely and constitutionally expressed their will, the Latvian state had not ceased to exist. The Constitution became the core of the national resistance movement. The Central Council of Latvia, founded on 13 August 1943, organised its work on the basis of the Constitution. Its Declaration of 8 September 1944 was a real attempt to achieve the restoration of Latvia’s independence on the basis of the Constitution and the idea of the continuity of statehood. Latvian exiles in the Western countries, as well as the members of the national resistance movement in occupied Latvia, actively maintained the demand for the restoration of Latvia’s independence throughout the Soviet occupation.

Constitution of Latvia after the restoration of independence

The most important amendments to the Constitution after the restoration of Latvia’s independence are as follows:

On 19 June 2014, the Saeima of the Republic of Latvia amended the Constitution of Latvia by rewording its preamble. The existing introduction was replaced by a broader text outlining the fundamental constitutional values of the State of Latvia.

Meaning of the Constitution

The Constitution is one of the symbols of Latvia’s statehood; it consolidates the most important elements that ensure the existence of the state. It is a legal and political document that reflects the constitutional identity, values and culture of the State of Latvia. The Satversme is the normative act with supreme legal force; all other Latvian laws and normative acts must comply with the Satversme.

The Latvian Constitution contains elements that are unique and peculiar to Latvia in the comparison of constitutional rights. Similarly, the elements of direct democracy, which are widely included in the Constitution of Latvia, are not very common in international practice. The Constitution ensures Latvia’s political unity and integration into European political and cultural structures.