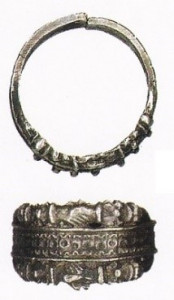 A silver ring found during the archaeological excavations at the Turaida Castle ruins in 1976 (from Jānis Graudonis. Turaida Castle: II – Finds. 2003)

The Turaida Castle for lovers is usually associated with the Rose of Turaida – the girl Maija, who symbolizes faithfulness. Maija lived in the first two decades of the 17th century. A reminder of love is also a silver artefact found 45 years ago in the courtyard of the Turaida Castle ruins – an engagement ring decorated with the motifs of two clasped hands in the front of the ring band. It is believed to be a ring of faithfulness, which the groom put on his bride’s finger. This could have happened at a ceremony when the engagement of the young couple was announced or at the wedding.

In order to determine the time of manufacture of the ring found in Turaida, it is necessary to take a closer look at its decoration. The ring’s hoop is surrounded by an ornamental band in flat relief with rounded recesses in the middle and shallow semicircular recesses on either side. The decoration resembles a perforated strip of tinplate applied to a smooth surface. 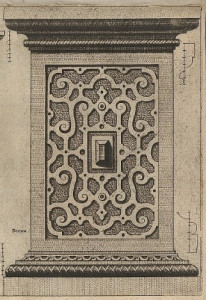 The symbolism of clasped hands dates back to Ancient Rome, when it was known in Latin as “dextrarum iunctio” – joined right [hands]. The handshake is a gesture used in greetings and farewells, in business and contract negotiations, to express friendship and trust. In a Roman marriage ceremony, a man and a woman clasped their right hands. The handshake motif can be seen on ancient Roman marble reliefs, small plastic art and coins.

In medieval German towns, brooches with clasped hands were known as “hanttruwebratzen” (modern German “Hand Treue”), which literally means “hand trust brooch”. This piece of jewellery was a visual sign of an agreement to marry or a symbol of betrothal. In Riga, which was part of the German cultural circle in the Middle Ages, such brooches were also made. The Statutes of the Riga goldsmiths (in German: Schragen), both the 8th paragraph of 1360  and the 9th of  1542, required a goldsmith to present four masterpieces in order to qualify as a master, one of which was a gold ring and the other one – a silver brooch with clasped hands. Several 14th-18th century brooches are stored in the National History Museum of Latvia.

Maybe the Turaida ring was made in Riga? It combines the skills in making the two things – the ring and the relief of clasped hands, mentioned in the Statutes of the Riga goldsmiths. 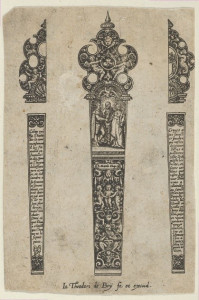 Theodor de Bry. Ornament for Knife Handle. Original engraving and its fragment with marriage scene and the motif of clasped hands in the ring. Circa 1580-1600. Stored at the Metropolitan Museum of Art, New York
https://www.metmuseum.org/art/collection/search/399698

The motif of clasped hands was used several times in the works of the Dutch engraver and goldsmith Theodor de Bry (Bry, 1528-1598). His engravings date from 1580 to the turn of the century and were made as models for craftsmen decorating knife handles. One of them commemorates a marriage: at the top, two-winged boys or putti hold a ring with a motif of clasped hands, while the middle part depicts Christ blessing a bridal couple during their marriage. They greet each other clasping their right hands.

The text in the cartouche refers to Matthew 19, which reads: “In the beginning, the Creator made them male and female. … Therefore a man shall leave his father and mother and be joined to his wife, and the two shall become one flesh. Therefore they are no longer two, but one flesh; what God has joined together, that man will not separate.”

The motif of clasped hands on the rings has not disappeared and exists today. Jewellers in different countries make both copies of old jewellery and new interpretations of the motif. Look on the Internet for the English words “handshake ring”, the German “Hand-in-Hand-Ring”, the Latin “dextrarum iunctio – ring” or the Italian “mani in fede” or “hands clasped in faithfulness”!