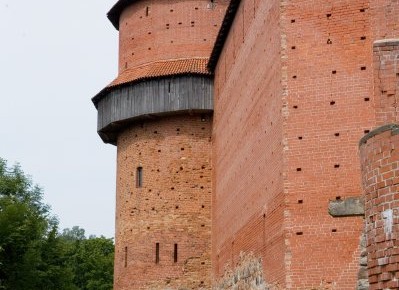 The Great Semi-round Tower was built in the 15th century on defensive purposes for cannons according to the methods and priciples charcteristic of Medieval Europe. The tower had 4 admissions. The basement was used as a prison, 1st-2nd floors were inhabited and heated by fireplaces. Three upper floors were used only in case of attacks – to defend the castle. The building was partially destroyed by fire in 1776.

Exhibition – Prison of the Castle

In the basement of the Tower there was a prison, which had a separate entrance from the castle yard. Exhibition arranged in the basement depicts a real situation with prisoners and prison guard . In the room there were found prisoners’chain connection places and cuffs, now displayed in exhibition. The room is observable through the bar of the door.

Exhibition – Guard of the  Castle
On the first floor room, suitable for living, there is arranged exhibition about guard of the Castle. The depicted situation with interior and dummies shows how the Castle guard spend their leasure time – sharpening a sword and throwing dice. The exhibited objects – daggers, knives, a sword and fragments of the hilt have been found in archaeological excavations.

Exhibition – Firearms
Arranged on the 2nd floor of the Tower and tells about firearms used in the Castle from the 15th-16th century. The exhibited objects – balls of different calibre, arrowheads, parts of crossbow and others have been found in archaeological excavations.

Exhibition – The Great Semi-round Tower
Exhibition on the third floor displays materials used in building of Tower – the bricks made in Turaida, roof tiles as well as antiquities found during investigation of the Castle: hoes, potsherds, chains, rings and others. The model gives insight into layout of the Tower after rebuilding performed in the 17th century.

Exhibition – Ancient pictures of the Castle
Exhibition on the 5th floor of the Tower shows Castle buildings, yard and the nearest surroundings in the18th-19th century.