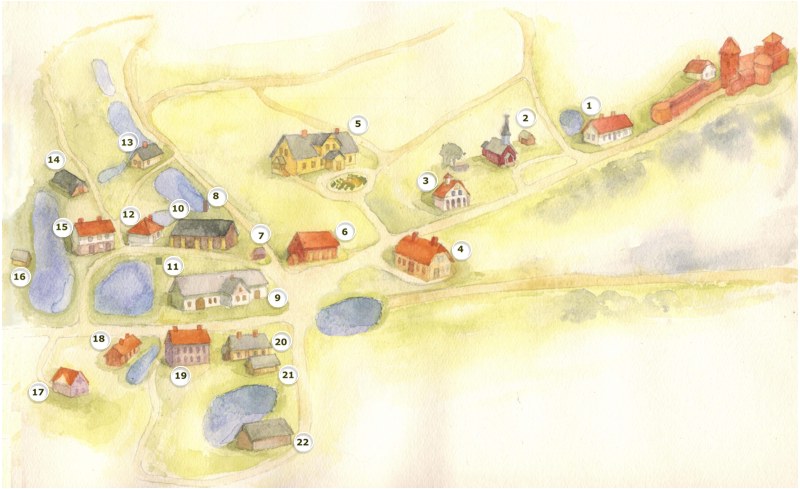 The origin of estates in Latvia dates back to the time when the first stone castles were built inLivoniaand the first cloisters were established, and they needed revenues.  So-called castle districts were established around the castle of the archbishop in Turaida and around all ofLivonia’s important castles.  The point to these was to collect fees.  TheTuraidaCastlewas a fortress, but also an economic centre at which the fees were collected and stored.  The Turaida Estate gradually developed from the castle’s operations.

The first written information about the estate – its ancillary buildings and land – is found in an audit conducted by the Poles in 1582 and again in 1590.  The document from the latter date shows that there was an estate near theTuraidaCastlewhich was based on fees and indentured servitude in the entire castle district.

The castle district became private property for the first time in 1751.  The Polish government presented it to the former chief judge of theTartubishopric, Elert Kruse.  In 1625, Swedish King Gustav II Adolf presented the Turaida castle district and estate to one of his advisors, Niels Shternsheld.  His son, Klaus, received permission from Swedish Queen Christina in 1652 to sell the castle and the estate to Gotthard Wilhelm von Budberg for 21,000 talers.

During the reign of Swedish King Charles XI during the late 17th century, Turaida, unlike many other estates in Vidzeme, was not reduced in terms of reviewing the issue of whether it could be privately owned.  The Budberg dynasty owned the estate until 1818.  The Campenhausen dynasty took over in 1821.

During the 19th century, the Campenhausens did not live at the castle permanently, and they had men to run the estate in their place.  The economic centre of the Turaida Estate was gradually established during this time.  The estate really flourished in the late 19th and early 20th century.  In 1907, the estate was inherited by Alexander Stahl von Holstein, and between 1910 and 1914 he tried to modernise the estate by building a sawmill, a lime kiln and a series of ponds.

After agrarian reforms in the 1920s, von Holstein retained ownership of 55 ha of land and seven buildings.  The rest of the land was divided up among 106 new farmers.  After the von Holstein family departed forGermanyin 1939, the estate was taken over by the Latvian state.

Today visitors can study the economic centre of the Turaida Estate as an unrepeatable environment in which there are a number of exhibitions.