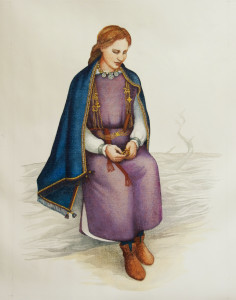 Continuing the work on the research theme “The Gauja Livs in the Cultural History of Latvia”, a reconstruction drawing of the 13th century Turaida woman’s costume was made. The reconstruction is based on the materials obtained from the 45th burial during the  archaeological  excavations, performed  in 1971, on the Turaida Church Hill. As a result – a set of ornaments and a fragment of a woolen shall were found. The findings showed that the deceased had a necklace of beads, tinklers and silver pendants around her neck, on each hand – a silver bracelet with a slightly enlarged middle part. Only a chain spacer, a knife in a leather scabbard, and a number of pendants have preserved from the chain ornament worn by Liv woman. About the woolen shawl, with which the buried woman was covered, testified just a small piece of fabric, fragments of end ornaments, some bronze rings, spirals and crumbled tin rosettes. Although the findings provided modest information for the visualization of the costume, the reconstruction was made by Irita Žeiere, one of the most professional archaeological textile researchers in Latvia, additionally using all available 12th and 13th century textile finds of ancient cemeteries from the collections of the Turaida Museum Reserve and the National History Museum of Latvia. As a result of her research, a drawing by the artist Linda Treija was made. The image of the Turaida girl, created by the researcher and artist, was named – Mare. The drawing will further serve to complement the message of the Turaida Museum Reserve’s exhibition “The Gauja Livs in the Cultural History of Latvia”, as well as will be used for the needs of the outdoor exhibition of the prospective Liv Trail.