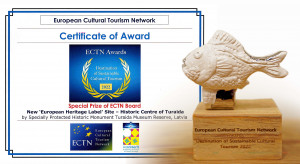 On 20 October, the Turaida Museum Reserve received a special recognition award from the European Cultural Tourism Network (ECTN) Board for the inclusion of the Turaida Historical Centre in the list of European Heritage Label Sites.

The 15th International Conference for Cultural Tourism in Europe took place in Krk, Croatia, from 19-20 October, and this year the theme was “Relaunching European Tourism through Cultural Heritage and Digitalisation”.

The tenth award ceremony for “The Destination of Sustainable Cultural Tourism” was held during the conference. This year, awards were presented in five categories:

It should be noted that in the Medieval Heritage and Archaeology nomination, the highest recognition went to the Medieval Castle of Rauna – for the work done in preserving, researching and incorporating the castle into contemporary events.

The “Destination of Sustainable Cultural Tourism ” award is organised by ECTN in partnership with Europa Nostra, the European Travel Commission and NECSTour, and supported by the European Association of Archaeologists, Interpret Europe and ReInHerit Horizon 2020. This collaboration between several organisations started in 2018 as a contribution to the European Year of Culture and has continued successfully in the following years.

Prepared by Gunta Zaķīte,
Head of the Education and Communication Department
of the Turaida Museum Reserve